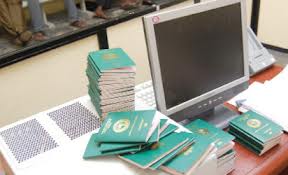 Following complaints and agitations from passport applicants concerning service delivery at our Passport offices, the Comptroller-General of Immigration Muhammad Babandede on the 13th June, 2016 at the Service Headquarters, Abuja gave all Passport Control Officers (PCOs) nationwide as well as Passport Issuing Desks in Nigeria’s Foreign Missions forty-eight (48) hours to clear all backlog of Passport applications. He added that failure to comply with the directive would be interpreted to mean the PCO is incompetent and will therefore be removed. He warned that the timeline for processing of Passports remains 72hours and he expects every Passport office to conform to the policy forthwith.

CGI Babandede also called on “Passport applicants to always get their breeder documents such as birth certificate, age declaration, certified guarantor’s forms from the right sources to avoid delay in the processing of their Passports”.

In a related development, the CGI said he has inaugurated a Committee “comprising the Asst. Comptroller-General of Immigration (Passports) Ndubisi Ndife and NIS Technical Partners, Messrs Iris Technologies Ltd and NewWorks Ltd to re-configure the NIS Passport platform in order to enable State Passport offices re-issue Passports to applicants who want to change their data on account of marriage or due to loss of previous ones”. With this development, such category of applicants will need not travel to Abuja to effect any change in their travel documents but go to the Passport offices in the States they reside to do it. Presently, women who wish to change their data such as name due to marriage are required to travel to the Service Headquaters in Abuja to effect those changes which at times results in their remaining in Abuja for up to three (3) days, a situation the Hon. Minister of Interior, Lt. Gen Abdulrahaman Danbazau Rtd. observed, exposes applicants to unnescessary risk of life and waste of funds.

The Committee has two months to complete the configuration and commence re-issuance of such Passports.