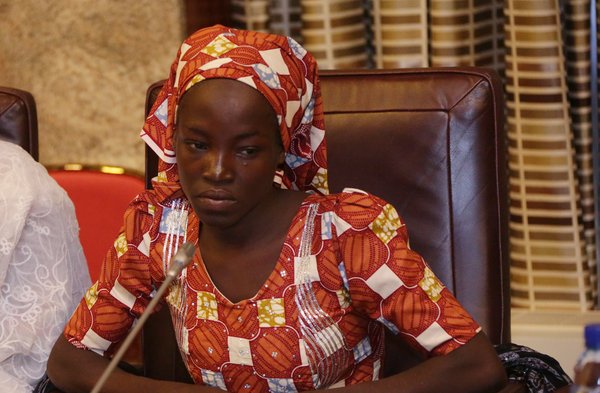 Members of Chibok community have decried what they described as the inhuman treatment meted upon their daughter, Amina Nkeki, who was abducted in 2014 and found on Tuesday.

Addressing journalists on Thursday, representatives of the community condemned the description of a Boko Haram suspect, Mohammed Hayatu, caught alongside Amina, as her husband.

The chairman of Chibok Community in Abuja, Tsambido Hosea, said Mr. Hayatu should rather have been reported as their daughter’s exploiter.
“We condemn, in strong terms, the calling of Mohammad Hayyatu as Boko Haram husband of our daughter,” he said.

“Upon confirmation by the Nigerian Military, he should be referred to as a: “Boko Haram sexual exploiter.

“Amina had no husband and who ever that was rescued with her should not be referred to as her husband for any reason,” Mr. Hosea stated.
He added that Ms. Amina should have been treated as an individual different from Mr. Hayyatu.

“They should be treated separately until Amina is fully rehabilitated.

“Even if he is also abducted and forced to marry her, he should not be referred to in any way as her husband, because there was never consent in getting her with a baby,” Mr. Hosea said.

Mr. Hosea who was speaking at a meeting organised by the Bring Back Our Girls Group, called for the immediate investigation of Mr. Hayatu’s role with Boko Haram, and his relationship with Amina.

“We are strongly calling on government to set up a team of expert investigators to investigate Mohammad Hayatu’s involvement into Boko Haram that led him to be the sexual exploiter of our daughter Amina so as to allow the law to take its proper course,” he said.

“He should be treated based on what investigations will reveal not to conclude from start that he was also abducted,” he stated.

Mr. Hosea said the government should follow the verification, authentication and reintegration system organised by the BBOG to restore Ms. Amina and her family.

“We therefore refer government and its agencies to the Verification, Authentication and Reintegration System that BBOG designed with the participation of our community,” he said.