The Nigerian Army has confirmed the rescued of one out of the 219 Girls of Government Secondary School, Chibok, who were abducted by Boko Haram in 2014. 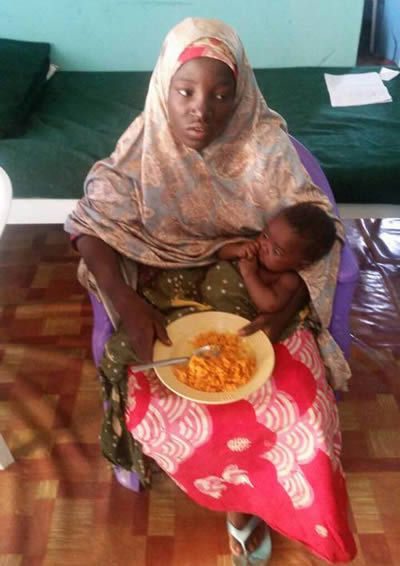 Amina was rescued along with her baby (conceived in captivity) and a suspected Boko Haram member, Mohammed Hayatu, who claimed to be her husband.

“This is to confirm that one of the abducted chibok school girls, Falmata Mbalala, was among the rescued persons by our troops at Baale near Damboa” Colonel Sani Kukasheka Usman , Acting Director Army Public Relations in a statement issued.

Also, the Co-founder of the Bring Back Our Girls Advocacy group, and former Minister of Education, Oby Ezekwesili on Wednesday has said that the Civilian Joint Task Force found one of the missing Chibok girls.

She disclosed this in a tweet, saying that the Chairman of the Chibok community in Abuja, Tsambido Hosea confirmed the reports.

Please recall that we informed you that one of the abducted Chibok school girls has been rescued earlier today and promised to give further details, the Military stated in a statement.

“Further to that, in continuation of Operation CRACKDOWN, troops of 25 Brigade Damboa in conjunction with Civilian JTF deployed in one of the blocking positions at Baale, near Damboa rescued one Miss Amina Ali and a suspected Boko Haram terrorist, Mohammed Hayatu, who claimed to be her husband.

“Both were brought to Headquarters 25 Task Force Brigade Damboa at about 2.30pm today. Preliminary investigation shows that she is indeed one of the abducted Chibok School girls abducted by Boko Haram terrorists on 14th April 2014 in Chibok and her name is Amina Ali as against Falmata Mbalala that was earlier stated.

“In addition, she is a nursing mother with a 4 month old baby girl who was named Safiya. Both the suspected Boko Haram terrorist and the nursing mother have been taken to Maiduguri for further medical attention and screening.