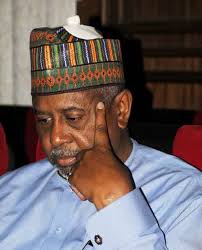 The former National Security Adviser, Colonel Mohammed Sambo Dasuki has dragged the Federal Government before the Economic Community of West African States (ECOWAS) Court of Justice over his continued detention without trial since December 2015.

Dasuki who was rearrested by the operatives of the Department of State Security Service (DSS) shortly after perfecting the third bail conditions granted him by Nigerian Courts, is asking the ECOWAS Court to enforce his fundamental right as enshrined in the African Charter on the People and Human Right.

In the legal action, instituted by his counsel Mr. Robert Emukpoeruo, the former NSA asking the ECOWAS Court to declare as unlawful and unconstitutional and breached of his fundamental right his arrest since last year without a lawful court order.

The applicant also prayed the court to declare action of government in keeping him in a dehumanising condition after the bails as unlawful and violation of his right to dignity of human person, privacy and family life guaranteed and protected right under Section 34 and 37 of the Nigerian Constitution and Article 17 of the International Covenant on Civil and Political Right and Article 12 of the Universal of Human Right.

He also asked the ECOWAS Court to declare the invasion of his privacy, home, and correspondence at his Abuja and Sokoto homes between July 16 and 17, 2015 during Ramadan Fasting and forceful and unlawful seizures of his properties without any lawful order or warrant of a court, constituted a gross violation of his fundamental right under Section 44 of the Nigerian Constitution and other relevant laws.

He therefore prayed for an order for his release and that of his properties during the invasion of his houses.

Apart from seeking for his release to face adequately charges against in courts, Dasuki also demanded a compensatory damages of N500 million against the government for its egregious violations of his right as guaranteed under the law.

However, at the hearing the Federal Government through its counsel Mr. T. A Gazalli objected to Dasuki’s Case, arguing that the ECOWAS Court has no jurisdiction to enforce the bail conditions because it cannot sit as an appellate court to the Nigerian Court. He therefore urged the Court not to entertain the case.

But counsel to Dasuki, Mr. Wale Balogun urged the Court to dismiss the objection of the Federal Government and assume jurisdiction on the breach of fundamental right as instituted by Dasuki.

Balogun told a Panel of three justices of ECOWAS Court, led by Justice Friday Chijioke Nwoke that what Dasuki was asking for is the enforcement of his fundamental right to freedom, having being arrested and detained for more than 3 months without trial or any lawful court order.

The Presiding Judge, Justice Nwoke who had earlier granted expeditiously accelerated hearing in the matter adjourned the case till April 11, 2016 for ruling on the jurisdiction of the court.

Buhari Gets Equatorial Guinea’s Highest National Honour For His Integrity