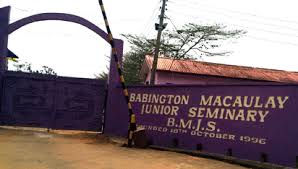 The news of the abduction of the girls broke on Tuesday just as Ese Oruru, the 14 year-old girl kidnapped in Bayelsa State and forced into marriage in Kano State, was released.

The House noted that the Lagos incident was an indication of rising security concerns in the country.

The session was presided over by the Speaker, Mr. Yakubu Dogara.

The House passed the resolution as it named a 10-man committee to visit Lagos State to find out the circumstances leading to the abduction of the schools girls.

A member from Lagos State Mr. Babajimi Benson, had drawn the attention of the House to the abduction of the girls under “matters of urgent public importance.”

Benson said, “More than 24 hours after the sad incident, the Nigeria Police Force and other concerned agencies of government have not been able to reunite the abducted girls with their parents.

“The House is worried that insecurity in Ikorodu Federal Constituency is becoming worrisome as the security agencies are finding it difficult to protect lives and property.”

Another member, Ekpoattai Ime, said the incident must be traumatic for the parents of the girls.

The lawmaker added, “I urge this House and the IGP to intensify efforts to rescue the girls.

“Girls are now kidnapped everyday in Nigeria, even women; this is sad.”

The House passed the resolution just as members of the Bayelsa State caucus at the House demanded the prosecution of the kidnapper of Ese, Mr. Yinusa, aka, Yellow.

The members commended all those who fought for the release of the minor, particularly the media and non-governmental organisations.
They claimed to have no knowledge of the kidnapping of Ese “until the past week, especially through the media.”