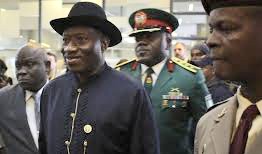 Col. Ojogbane Adegbe is being detained by the Economic and Financial Crimes Commission (EFCC), which is on the trail of another key aide to the former President – Waripamowei Dudafa, former Special Assistant on Domestic Affairs.

Pointblanknews.com is reporting that Adegbe and Dudafa collected the cash — $47m and some Euros from the Office of the National Security Adviser(ONSA), it was learnt.

The money was diverted by ONSA from a Signature Bonus Account in the Central Bank of Nigeria (CBN).

It was learnt that the former ADC was yesterday relocated from Mogadishu Cantonment for quizzing by the EFCC on the disbursement of the cash.

A source tells  Pointblanknews: “We spent hours to grill the ADC on how he got and disbursed the $47million which was delivered to him in about 17 suitcases.

“The money was diverted from the CBN to bribe or settle PDP delegates to adopt ex-President Goodluck Jonathan for second term.

“We have asked him in the last 12 hours to account for how he came about the cash.

“He is also expected to provide the list of beneficiaries of the largesse. All the beneficiaries will be unveiled by the EFCC and they have to refund public funds.”On Dudafa, the top source said: “We are tracking him down. We are trying to locate his whereabouts in Dubai and some Caribbean Islands.“What is certain is that Dudafa has moved out of the country to avoid being arrested by the anti-graft agency.”

In an October 29, 2015 to EFCC, the apex bank said: “Your letter ref: EFCC/EC/ CBN/ 12/163 dated 21st September 2015 to the Governor of Central Bank of Nigeria and the directive by the management that we provide some explanations, we wish to state as follows:

“The N10billion constitutes two tranches of N5.08billion each debited to the CBN/OAGF SIGNATURE BONUS ACCOUNT NO 400225220 vide OAGF memo Ref: FD/LP2015/1/28 DF to the Office of the National Security Adviser A/C Number 20172241019 with the CBN Abuja and the second was for credit into the account of National Security Adviser Account Number 1014199287 with Zenith Bank Plc Wuse II Abuja.

The CBN Governor responded to a letter ( EFCC/EC/CBN/12/163) of 21st September, 2015 by a former Chairman of EFCC,Mr. Ibrahim Lamorde.The three-paragraph letter said: “ This commission is investigating a case of Abuse of Office and money laundering of funds for special services by the Office of the National Security Adviser which were withdrawn in November 2014.

“We seek your kind assistance to provide available information on the disbursement of the funds with copies of relevant documents, including transfers to foreign and local banks and cash withdrawals.“Thank you in anticipation of your usual cooperation.”

In his Statement of Witness/Accused Person which had been filed in the High Court of the Federal Capital Territory(FCT), ex-NSA, Col. Sambo Dasuki said the over N10billion was given to the ADC and Dudafa.

“The money was for delegates that attended the nomination convention for the PDP presidential nomination. The money was paid and sent to Hon. Dudafa(SSAP Household) and ADC(C-I-C) for distribution on the instruction of the President.

“Based on the statement of Director of Finance and Administration (Salisu), Ibrahim Wambai, and Yazidu Ibrahim, all the cash(both foreign and local) are usually given to them for official use.