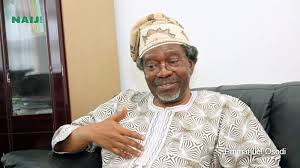 A Professor of International Law and Jurisprudence, Professor Akin Oyebode on Wednesday gave his opinion about the choices of Ministers and portfolios given to them by President Muhammadu Buhari.

Speaking on Channels Television News At 10 Wednesday, Prof. Oyebode said on the choice of the Minister of Education and the Minister of State for Education, he said it was a tragedy, insisting that a professor, who had ran, a university should not be a sidekick to an accountant turned communist.

“It can only happen in a country like this,” he said, further insisting that Tony Anwuka deserved more than being a Minister of State for Education.

But Professor Oyebode was of the opinion that Mr Adamu had no experience in the education sector.

“The core competency is missing from Adamu Adamu and that is why I call it a case of the tail wagging the dog.”

He insisted that experts in the field could have been a better choice and envisaged a review of the cabinet, which he said was not far-fetched.

“You have some very brilliant and interesting people, with tremendous antecedents and some a little bit less so. I have a feeling that we have a bitter-sweet experience with the ministers that have just been appointed, especially in relation to the portfolios assigned,” Professor Oyebode said.

Behold The Buhari Cabal! The Men Who Will Shape Buhari’s Government