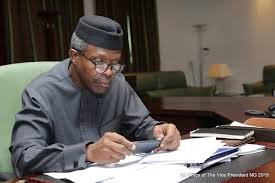 This is even as the MTN Chief Executive Officer Sifiso Dabengwa has resigned following the $5.2billion fine slammed on the South African Telecom giant by the Nigerian Government.

MTN was fined $1,000 for each line uncut by the Nigerian Communications Commission (NCC) resulting to its $5.2 billion fine.

Pointblanknews.com gathered that the VP has met with the MTN official clandestinely and currently using some proxy to dish out information to the telecoms company.

It was learnt that President Muhammadu Buhari is not very happy about the involvement of his vice, and has asked the National Security Adviser to rebuff any attempt by anyone to influence decision.

It was learnt that the vice president has urged the NSA, and officials of NCC to accept the apologies of MTN Nigeria,  and appealed to them to reduce the fine since it has affected their finances, and shares.

It has lost more than $2.7b from people migrating from its shares to others since this incident.

According to a source, “ I can confirm that the commission has received an official letter from MTN admitting its guilt and pleading for leniency. However, the power to grant the leniency is no longer entirely on NCC’s hands but that of the presidency. But there are also indications that the Federal Government may ask us to reduce the fine to an appreciable level. An official of the company who spoke with our correspondent on condition of anonymity considering the actors involved,  refused to release details of the VP’s involvement in the meetings because his lines may be bugged and conversations traced.

A delegation of MTN officials from the company’s headquarters in South Africa, led by the company’s Chief Executive Officer, Sifiso Dabengwa, were said to be in Nigeria to plead for a lower penalty. NCC gave MTN untilNovember 16 to pay the fine.

An NCC official confirmed that the MTN delegation from South Africa is in the country.

He said, “I can confirm to you that, yes, the MTN big guns were in the country. They have been in touch with us although we are yet to meet officially. We have told you we are not directly in charge of this case
again. The office of the National Security Adviser (ONSA) has taken over.

Although Osinbajo spokesman,  Laolu Akande denies the involvement of his boss, checks by pointblanknews.comreveal that top brass of the company and shareholders , including the Vice President are  deeply worried about the slide in the fortunes of the company since the fine.

MTN’s shares in Johannesburg had fallen by about 25% since the fine was announced on Monday last week, wiping about 60bn rand (£2.7bn) off its market value, with the company now worth about £13bn.The stock was down 5.5% after trading recommenced following the company’s announcement that it was in talks with Nigerian authorities about reducing the fine.

Non-Executive Chairman Phuthuma Nhleko has agreed to act as executive chairman for a maximum period of six months while the company identifies a successor to Dabengwa, Johannesburg-based MTN said in a statement on Monday. Dabengwa resigned over the weekend after consultation with the board and his financial compensation hasn’t been resolved, spokesman Chris
Maroleng said by phone.

“Due to the most unfortunate prevailing circumstances occurring at MTN Nigeria, I, in the interest of the company and its shareholders, have tendered my resignation with immediate effect,” Dabengwa said in the statement.

MTN has until Nov. 16 to pay the Nigeria penalty, which relates to the timing of the disconnection of 5.1 million subscribers and is based on a charge of 200,000 naira ($1,008) for each unregistered customer. The company’s shares lost almost a quarter of their value following the disclosure of the fine, before a partial recovery.

“I proactively deal with the Nigerian regulator and will continue to work with them in addressing the issues around unregistered subscribers as a matter of urgency,” Nhleko said.

MTN will continue to inform shareholders of any material engagements with the Nigerian authorities, the company said.