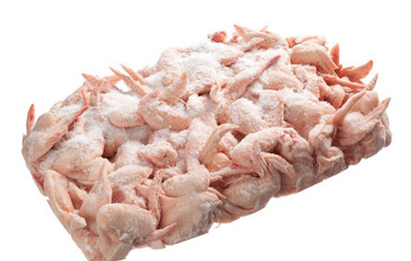 There was pandemonium last weekend near the Trailer Park at Ebubu, in Eleme Local Government Area of Rivers State when thousands of youths, women and children descended on a pit where several tonnes of chicken condemned by men of Nigeria Customs Service, NCS, were buried. They dug them out and took same home for consumption.

According to Vanguard Newspaper, the scavengers came with shovels, pans, basins and buckets to cart home their loot.

The Customs had last Friday, dug a huge pit and buried thousands of cartons of frozen poultry seized at the Onne Ports. Witnesses said the cartons of chicken were brought in six containers and emptied in the pit by NCS .

But news soon spread on the development and early on Saturday, the scavengers came calling. With no security at the site, they dug and opened the pit.

A visit to many homes around the area revealed barbecuing going on as people roasted and fried the chicken.

In one home, a full-length refrigerator was seen stocked to the brim with roasted chicken, while they invited guests to sumptuous meals.

But the development sent an alarm across Eleme and the neighbouring communities about the danger of eating the condemned chicken.