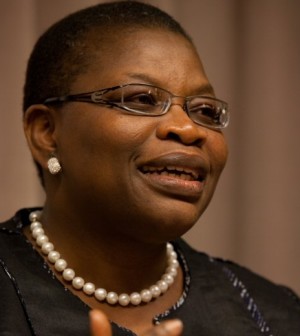 Former Minister of Education, Oby Ezekwesili, has berated Senate president Bukola Saraki for closing the senate so that other senate members could follow him to his CCT hearing.

She says it’s selfish of him. Saraki arrived at the Code of Conduct Tribunal (CCT) where is trial for alleged false declaration of assets continues.

He arrived in company of numerous senators at 9:45am. More that 45 of them, who were seated in six long seats on the left side of the courtroom. When Saraki was at the tribunal on October 21, he came with 81 senators.

Selfishness is being concerned, sometimes excessively or exclusively, for oneself or one’s own advantage… 1/2 @bukolasaraki

Selfishness is a vice and not a virtue because it disregards the good of the greater number—2/2 . @bukolasaraki

Selfishness is converting the Senate of the Federal Republic of Nigeria into Supporters Club for your PERSONAL court case. @bukolasaraki

Finally, @bukolasaraki , such selfish “pocketization” of a Public Institution that you are perpetrating is NEVER sustainable. It cannot be.

A text message was allegedly sent out to Senators, prompting them to yet again, escort Senate President, Bukola Saraki, to his trial at the Code of Conduct Tribunal.