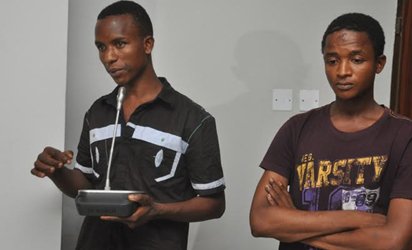 24 hours after the Department of State Service paraded two suspects in connection with the abduction of the elder statesman, Chief Olu Falae, the Police said they have another sets of five suspects in their custody.

Chief Olu Falae, a former Presidential candidate and Yoruba elder statesman was kidnapped on the 21st of September 2015 by armed men in his farm in Akure, Ondo state, but was released after parting with a ransom of N5 million.

The Department of State Services had on Monday paraded two suspects, Babawuro Kato and Abdullahi Usman, who claimed that the abduction of Falae was carried out by a 3-man gang, and that the mastermind, one Dantito, escaped with the N5 million ransom collected from Falae’s relatives.

Abubakar Garba, who addressed the press on behalf of the Service said two of the abductors were arrested by the personnel on the 5th of October 2015 at J, Zebra Hotel along Ganaja road, Lokoja, Kogi State.

But the Inspector General of Police (IG) Solomon Arase, during the monthly meeting of top police officers at the force headquarters in Abuja yesterday, said the police apprehended five of the eight-man gang which abducted the elder statesman.

In a statement issued to NewsWireNGR, the IG  named the suspects to include Abubakar Auta, Idris Lawan, Umar Ibrahim, Masahudu Mohammed and Bello Tanu whom he said operated a statewide kidnapping ring.

The suspects, the IG added, were arrested at their hideouts in Niger, Ekiti and Ondo States respectively.

According to the police boss, items recovered from them included the Bajaj motorcycle used to transport their victim and N823,990 cash which was part of the N5 million ransom paid to them.

“All the arrested suspects have made confessional statements highlighting details of the operations and their individual roles. As I address you now, the suspects are being charged to court in Akure, Ondo State,” Arase stated.

When asked if the suspects paraded by the DSS were part of the kidnap gang arrested by the police, Arase stated that he had requested the transfer of the two suspects from the Director-General of the DSS.

He said: “I said there was an eight-man gang and from the investigations we have carried out so far, those two that were paraded yesterday (Monday) by the State Security Service were part of that eight-man gang.
“I have written a letter to the DG, SSS that we are arraigning the suspects and once they bring the two suspects, we can amend the charge.”