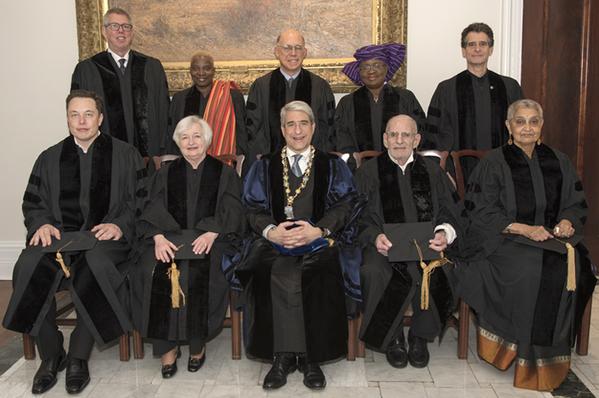 Yale University awards 9 honorary degrees to individuals who have achieved distinction in their respective fields and a Nigerian Minister was among the awardees..

She’s Nigeria’s Minister of Finance and the Coordinating Minister for the Economy, Dr Ngozi Okonjo-Iweala, awarded a doctor of humane letters but the institution.

President Peter Salovey presented honorary degree to Okonjo-Iweala and eight other individuals who have achieved distinction in their respective fields at the 2015 Commencement ceremony held on May 18 on Old Campus.

Mrs Iweala’s citation reads, “You are a citizen of your country, your continent, and the world. Shaped by challenging experiences during your childhood in Nigeria, you have made social and economic reform your mission.

The ivy league collage remarks about the Nigerian Minister continued, “As Nigeria’s coordinating minister of economic development and minister of finance, you have tackled corruption, created a vision and path to long-term economic stability, and worked to build a culture of transparency.

“At the World Bank, you made food security a priority and provided policy advice and capital for the world’s poorest countries.”

“With wisdom, a fierce dedication to doing what is right, and unflagging energy, you have transformed the economic landscape of your nation.

The citation concluded, “We are proud to name you Doctor of Humane Letters”.

Tunde Bakare Rushed To Reddington Hospital After Collapsing During Lecture