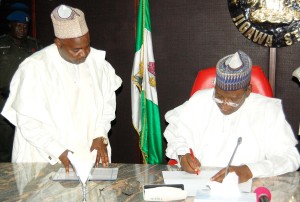 The bill on the entitlements of former governors, speakers and their deputies passed by Jigawa House of Assembly, is aimed at eliminating corruption, the Speaker, Alhaji Adamu Ahmed, has said.

The News Agency of Nigeria (NAN) reports that the bill made provision for former governors, speakers and their deputies to receive the basic salary of the incumbent as pension.

It also stipulated that the government should provide the former officials with two new vehicles to be replaced after every four years.

Adamu made statement on Sunday in Dutse while reacting to the controversies generated by the bill.

He explained that the house passed the bill to curb looting of public treasury by former office holders, saying it was not passed to enrich them after leaving office.

“The bill will discourage stealing and looting of government treasury.

“If a former governor or speaker knows that the government will take care of him, there won’t be any basis or need for him to steal,” he said.

The speaker said that all former civilian governors, speakers and their deputies were expected to benefit from the provisions of the bill which is awaiting the governor’s assent.

Governor Elechi Undergoes Eye Surgery In London, A Reminder Of The Failed Health System In Nigeria