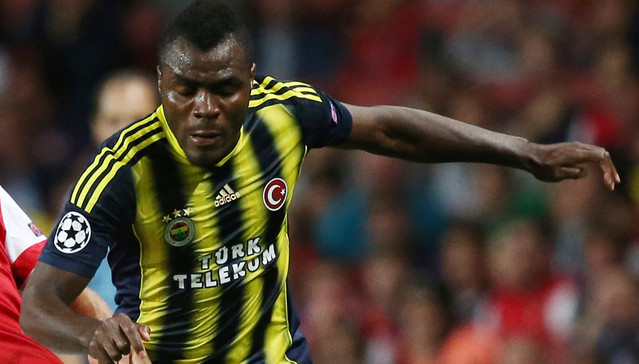 Super Eagles and Fenerbahce striker Emmanuel Emenike is still in shock after their team bus was shot at by a gunman on Saturday night in Turkey.

The Turkish league leaders were travelling to Trabzon airport to fly back to Istanbul, following their 5-1 victory over Rizespor, when the shooting happened.

The driver was taken to hospital, but no players were injured in the attack which Emenike described as a ‘scary moment’. “The incident left several players in shock on a day we should be celebrating a big away win,”

Emenike told BBC Sport.“I was on the phone with my brother when I heard the loud sound and I thought one of our tyres had busted because the bus was swerving on the road.

“But when I found our security officer in front of the bus I knew something must have gone awfully wrong.”

The 27 year old Emenike says it was not long before they realised someone had been hurt.

“We quickly realised the security guy was the one who hit the break, and he said the driver [who was already soaked in blood] had been shot.

“The word ‘shot’ came as a big shock but when we saw blood and the shattered driver’s side window, it quickly turned into a scary moment for everyone on the bus.”

Fenerbahce have since called for the Turkish Super Lig to be suspended following the attack.

Emenike and his team-mates have been left stunned by what happened.

“It’s unbelievable that some people actually fired shots at our bus and the driver was badly hit, a bus conveying footballers and officials.

“It’s strange, but it’s also an indication that things happen in life and no one can be guaranteed complete safety.

“I just want to wish our brave driver a speedy recovery. I will forever be grateful to him and our security man because that bus could have plunged down the bridge.

“The outcome could have been terrible and tragic but we are all here today because of them and of course God was on our side.

For Emenike, the shooting was particularly shocking as it brought back bad memories.

“I’ve been involved in a terrible accident in Nigeria before, where my mother suffered severe bruises, and for a moment I had a terrible flashback when that bus was swerving all over the road.

“I hope this incident will be investigated thoroughly and the perpetrators are made to face the justice system.

Emenike, who has endured a turbulent period in Turkish football since he re-joined Fenerbahce in 2013, demanded to be substituted after he was booed by his own fans during their 1-0 home win over rivals Besiktas two weeks ago.

The Nigeria international has only scored four goals in 23 league appearances this season but insists this latest incident will not force him to quit the Istanbul-based club.

“I have a contract here and I love the club,” he added.

“It’s only an isolated incident and not enough to make me look for an easy way out.

“I have put the past behind me and I am only focussing on what lies ahead. I am stronger now than before and right now I just want to wish our bus driver a speedy recovery.”

Fenerbahce, who have former Premier League players Dirk Kuyt, Raul Meireles and Emre Belozoglu in their side, are the defending champions and have won the major domestic competition 19 times.

The Istanbul-based team went top of the table with their victory on Saturday, one point ahead of bitter rivals Galatasaray.