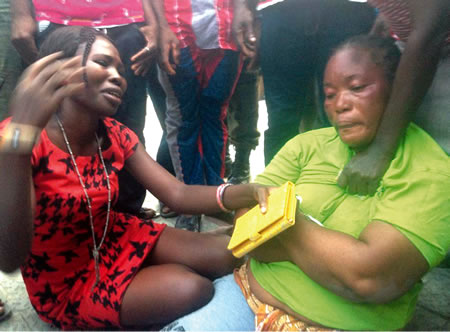 Three policemen and a fish seller were killed on Thursday by a gang of robbers who stormed the First City Monument Bank on Admiralty Way in Lekki, Lagos State.

It was learnt that the robbers, numbering 13 arrived the bank wearing military uniform and shooting sporadically for about 30 minutes.

Eyewitnesses claimed that the robbers, who were armed with Ak-47 guns gained entrance into the bank after overpowering the security men.

They were said to have announced their arrival by shooting sporadically with their automatic weapons before making their entry into the bank.
“Those killed included a 15-year-old girl, who sold fish opposite the bank. She was hit by a stray bullet. Another man, also killed, was said to be a policeman in mufti,” an eyewitness, Femi Olatunji told Vanguard.

“The other two policemen were escorts to expatriates of an oil company. The expatriates were seated in a white coaster bus, while the policemen occupied the back seat. They did not collect the expatriate’s briefcases after killing the policemen. They left with boxes of money, before other policemen arrived,” he added.

“They were shooting non-stop for about 30 minutes, I saw a policeman and two others persons on the floor with blood gushing out of them. Some policemen tried to engage them, but the robbers were very brutal. They eventually robbed the bank,” another witness, Kola Alade, told Punch.

The incident was confirmed by the police spokesperson for the state, Kenneth Nwosu.

“Three policemen who stood gallantly defending the facility were killed in the process,” Nwosu said.

“Investigation has already commenced and we have launched a serious manhunt on the robbers. We will ensure that we trace their hideout and track them down,” he added.

The robbers were said to have escaped in a speedboat which they reportedly arrived the scene with.