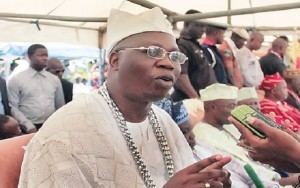 The Oodua Peoples Congress (OPC), has said that it is fully in support of the re-election bid of President Goodluck Jonathan of the ruling Peoples’ Democratic Party (PDP), reports DailyTimes Newspaper.

The national leader of the group, Mr. Ganiyu Adams, revealed this to newsmen in Lagos after a solidarity visit of its members to the President at the State House Marina, Lagos. Adams said that every elected president in the country was given a second chance and Jonathan should have his. He said that OPC was primarily concerned because Jonathan had convoked the National Conference and promised to implement the decisions of the conference for the benefit of Nigerians.

“We are here for a solidarity visit to Mr President to pledge our unflinching support to him on the coming election in 2015 for the reason of the statement credited to him that he will implement the outcome of the national conference.

“The second main reason is that as an activist, for the past 20 years I have never witnessed any President who will be in power for four years without using the instrument of power to harass an activist or civil society. “Based on his humility and his love for Nigeria, we thought it is necessary for our dear organization to support him,” he said.

He said the group’s visit to the President was an honour to the group because the Yoruba cherished being honoured by leaders. “Our coming here is to show the entire Nigerians that we are in full support of Mr President. We want him to finish the projects that he started in the first term during second term.

“In the history of Nigeria, there is no president that will serve a first term without second term in civilian regime.” He also said that the President came from the Niger Delta region, which produces the bulk of the nation’s wealth and it was incumbent upon the citizens to support the minority to complete a second term through Jonathan.

“With the antecedent and the records of Mr President for Nigeria not to allow him to run for a second term. “As a matter of fact for a person coming from the minority that 85 percent of the resources used to run this country, we must use that opportunity to give him a second ticket so that this country can be run peacefully. “We don’t want crisis after this election.

Most of the products that we use as resources of this country come from the South-South. “So we have the obligation to allow him to serve second term,” Adams said.