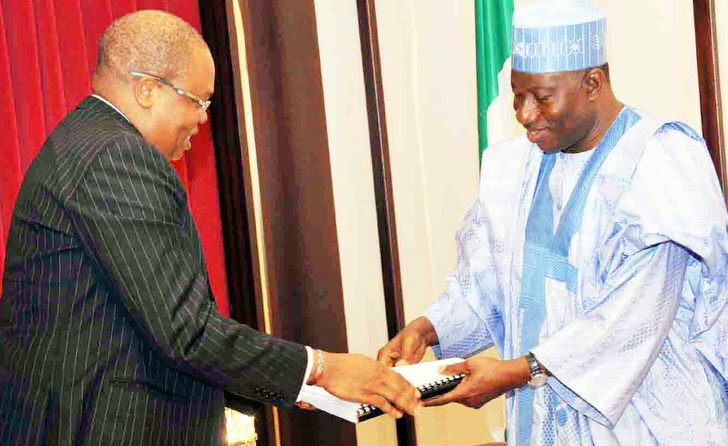 Reports have it that despite delaying to make public the full report of the forensic audit on the operations of the Nigerian National Petroleum Corporation; President Goodluck Jonathan has allegedly, approved the disbursement of the $1.48 billion (about N249 billion) recovered from the national oil company.

The return of the money by the NNPC is one of the major recommendations of the audit conducted by global firm, PriceWaterHouseCoopers. The full audit report is yet to be made public despite protests by Nigerians including civil society groups and opposition parties.

However, on Tuesday, officials stated that Mr. Jonathan had asked that the money, once returned by the state oil firm, be shared among the tiers of government.

The confirmation of the President’s approval came from both the Minister of State for Finance, Bashir Yuguda, and the Chairman of the Commissioners’ of Finance Forum, Timothy Odaah, who spoke at the end of the February meeting of the Federation Accounts Allocation Committee in Abuja.

According to the Minister, based on the President’s approval, he has since opened discussions with the Minister of Petroleum Resources, Diezani Alison-Madueke, and the Group Managing Director of NNPC, Joseph Dawha, on the modalities for sharing the money among the three tiers of government.

“We are working on the modalities and time-frame within which the money should be paid back to the Federation Account,” the minister said. “The President has addressed the issue. What we are waiting for now is to get the money from NNPC and distribute according to the three tiers of government.”

The Petroleum Minister, Diezani Alison-Madueke had told the Financial Times of London, that government would not publish the report ahead of election, to avoid a “rabid opposition” finding “all sorts of minute detail (in the full report) to create concern”.

Based on Mr. Yuguda’s “very soon” and Mrs. Alison-Madueke’s seeming fear of a “rabid opposition,” the government appears to have concluded to release the report only after the general elections on March 28 and April 11.

The audit was conducted after the immediate past Central Bank Governor, Lamido Sanusi, alleged that as much as $20 billion may have been missing in the national oil company’s accounts.

According to Mr. Odaah, who is also Ebonyi State Commissioner for Finance, the President approved the payment of the money into the Federation Account for immediate distribution during the next FAAC meeting to be held in March.

He said the state finance commissioners were worried when the issue was not captured in the report presented by the Accountant General of the Federation for Tuesday’s February meeting, particularly the clarification by the Central Bank of Nigeria on the exchange rate to be adopted in disbursing the money.

On other issues discussed during the meeting, Mr. Odaah said the attention of the president was drawn to the poor performances of the electricity distribution companies across the country.

He said the state commissioners were concerned that despite government’s effort to improve the level of electricity supply in the country, the performance of the power distribution companies were nothing to write home about.

“The Federal Government is making great effort to ensure that the electricity distribution is better, but, what we are seeing as commissioners of finance in our respective states, is different. We have to speak up against anything that would negatively impact the effort to energise our economies.

“Power supply is very important and therefore the president’s attention should be called to note that the EDCs have to be directed to do more to help the states,” he said.