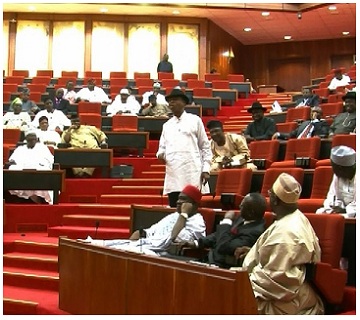 A bill seeking the confiscation, forfeiture and management of properties derived from unlawful activities scaled second reading on the floor of the Senate in Abuja on Tuesday.

Leading the debate, Senate Majority Leader Victor Ndoma-Egba (PDP-Cross River), said the bill would provide a legal and institutional framework for the recovery and management of proceeds of crime.

According to him, the bill will harmonise and consolidate existing legislative provisions on the recovery of proceeds of crime and related matters in the country.

He added that there are assets forfeiture provisions in extant laws like the EFCC Act, Recovery of Public Property Act, Failed Banks (Recovery of debts) and some other penal laws in the country.

He said these provisions basically cover forfeiture after conviction, and considering the gestation of most criminal prosecutions in Nigeria, the new bill was imperative.

He noted that many suspects in corruption cases always managed to hold on to their ill-gotten assets.

Ndoma-Egba said the absence of a civil forfeiture law in Nigeria made the fight against corruption a mockery.

According to him, criminals in the country were not deterred because of the realisation that they would not be denied the benefits of their loot.

He added that the bill was part of the action plans of government to prosecute criminals within and outside the nation’s borders in the bid to fulfill its commitment to international community.

“There is no gainsaying the fact that so much money has been lost to corruption and criminal activities in the last decade’’, he said.

The lawmaker said if passed into law; it would ensure the confiscation and civil recovery of proceeds of crime as well as facilitate the repatriation of stolen funds abroad.

Supporting the bill, Sen. Smart Adeyemi (PDP-Kogi), said the passage of the bill would go a long way in fighting corruption in the country.

He said the passage of the bill would also facilitate proper and accountable management of funds from other countries.

“We know those who have stolen our money, recovering the money is the main issue’’, he said.

Sen. Nkechi Nwogu (PDP-Abia), said the bill was timely and the aspect that dwelt on forfeiture of loot made the bill more meaningful.

“This bill is timely and I am particularly happy that it does not only concentrate on prosecuting criminals but also confiscating loot.

“It is appalling to see unexplained, unidentified sources of wealth; people exhibit wealth which cannot be traced to any meaningful activity.

“I believe that the bill will give the relevant agencies the search light to trace the sources of people’s wealth’’, she said.

Sen. Ayogu Eze (PDP-Enugu), said that fighting corruption must start with every Nigerian, not only those holding public offices.

According to him, the bill, introduced in 2014, is a clear demonstration of the willingness of President Jonathan led administration to fight corruption.

He urged Nigerians to support the bill to complement the ICPC and EFCC in the fight against corruption and money laundering.

“If you do not give bribe, nobody will take bribe from you, so, we must fight all the facets of corruption if corruption must be stamped out.

“No minister can be corrupt without the support of his subordinates’’, he said.

He said the initiators of any corrupt activities should serve higher degree of punishment than others who participated in the process.

They were mandated to report back to the Senate within two weeks. (NAN)

Related Topics:SenateBill Reading
Up Next