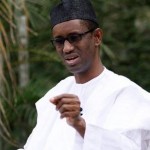 Former Chairman of the Economic and Financial Crime Commission, EFCC, Mallam Nuhu Ribadu, has pooh-poohed allegations by the former Central Bank governor, Prof. Chukwuma Soludo that N30 trillion was stolen under the watch of the coordinating Minister of the economy Dr. Ngozi Okonjo-Iweala.

Ribadu spoke yesterday, in an interview with Vanguard in Abuja, pointing out that he was not only baffled but amused over the allegation, as he knew that Okonjo-Iweala was ‘’honest, reliable and of impeccable character.’’

His words: “I was baffled and got deluded for anyone to say that N30 trillion got lost, I think we just have to look at what we earn as a country and what our budget had been in these few years.

“And see how possible is it and if everything we earned is not up to that within the period she has ben the minister which is about three to four years.

“And for somebody to say that N30 trillion is missing is baffling, especially if you know what our budget has been these years.

“We need to be careful to avoid more damage to our nation because there are certain things that when it comes out, it will never go back again.

“I challenge anybody to say that she stole N1 at that time, we were all there, I was in charge of EFCC and I want to hear anybody say that she did this and that.

“And I followed her up till now, I think it is somehow uncharitable for someone to come out to say that such an amount of money was missing under her watch.”

He said that while working under President Olusegun Obasanjo; Okonjo-Iweala was the economic team leader and she coordinated the economic policy of the then administration effectively.

He warned Nigerians to be careful with their utterances and shun the habit of pulling down their people who have climbed to such a high level of international repute in the name of politics.