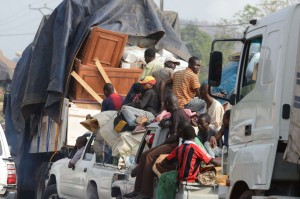 Ahead of the 2015 Presidential Election, Nigerians are migrating in anticipation of electoral violence. Mostly Igbo’s are said to have been moving out of Northern Nigeria in hundreds, the igbo ethnic group killed in millions during the civil war and subsequent elections in Nigeria are not taking the next Nigerian polls lightly.

NewsWireNGR correspondent who visited some shops at Emab Plaza Abuja (recently bombed by insurgents) and Banex reports that some shops have been locked as the traders have all moved back home in the wake of the coming election.

Hundreds of non-indigenes residing in the commercial city of Kano and its neighbourhood have massively left the city for their various states of origin in the South-South and South-eastern parts of the country for fear of election violence.

The popular motor park at Sabon Gari witnessed increasing traffic of passengers leaving the state to the East and South-South part for fear of the election outcome and houses of non-indigenes residing at Sabon Gari, Badawa, Kawo and other areas of the metropolis were locked after they fled the city.

The fleeing non-indigenes noted that they are always targets of any attack by their host community of Kano anytime there is tension.

In 2011, more than 600 Igbos were reported to have been killed during the post election violence in Northern Nigeria . A trader, Okechukwu Okey who spoke to NewsWireNGR tells us why they’re moving for safety.

“I was almost killed in the North, i moved to Abuja and i still do not feel safe here, i have moved my family members to the East and will be leaving by the weekend too” Okechukwu said. “Once beaten twice shy, i cannot wait for what is coming, whenever there is an election or conflict in this country, it is the Igbos that are attacked and i am not ready to be killed”.

Over the weekend in Abuja, the Imo State governor, Rochas Okorocha, also of the Igbo tribe but of the opposition All Progressives Congress called on Igbos not to leave the North. He said that the fear is unfounded, nothing that such movement will only be necessary if they were going home to cast their votes in the elections.

But another trader in Banex Plaza, Ifeanyi Azubuike who spoke to NewsWireNGR, when told what governor Okorocha had said, had the following response. “Okorocha should sit in Imo with his private jet and tell us in the North what to do, this is not an election to joke with, all my friends have gone and i am leaving this week” he said. “When they come for me will he protect me?”.

Incumbent President Goodluck Jonathan of the ruling Peoples Democratic Party, will be contesting the Presidential election with APC’s General Muhammadu Buhari who has a cult following from Northern Nigeria.

Jonathan defeated General Buhari in the April 2011 elections. The violence that broke out led to the loss of lives and the destruction of property worth millions of naira. Kaduna has still not regained its economic and cultural vibrancy in the aftermath.

Some Nigerians online are also reporting the mass exodus of Igbo’s in Northern Nigeria.. See tweets..

I don’t understand,what are the Igbos up to in Lafia? Closing down shops, Mass exodus… hmmm! what message are they passing?

When Igbos leave north 2 go & vote GEJ in the East, there is a problem. The unity of Nig is on the line. If GEJ loses, will they stay there?

If millions of Igbos leave the North to flee from “Buhari’s supporters” in the wake of February 14 – even Mbaka won’t save APC.

People are migrating in anticipation of violence. That is Nigeria’s reality, our twitter fantasies cannot change these uncomfortable facts.

Millions of Igbos are fleeing the North in the wake of February 14. Most aren’t on twitter, but it points to growing fears/tensions.

The leader of the Movement for the Actualisation of the Sovereign State of Biafra (MASSOB), Chief Ralph Uwazuruike, has repeatedly called on Igbos to leave the North ahead of the election.
In his recent messages, which he called a last warning to all Igbos resident in the northern part of Nige­ria . He said the direc­tive had become necessary to avoid further loss of Igbo blood in the North due to the increas­ing bloodletting by Boko Ha­ram insurgents.

He said the pronouncement of a prophet was not needed for any Igbo man or woman to know that Nigerian security forces could no longer guaran­tee their safety since the insur­gents had not relented in their wicked bloodletting activities. He said anybody who disre­garded the last warning would face the consequences.