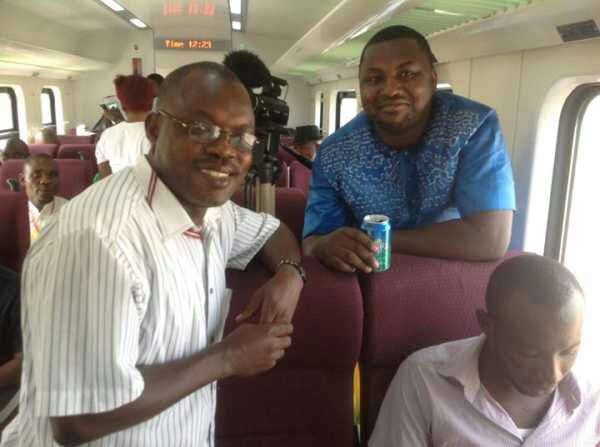 President Goodluck has revitalised the over  thirty-year-old abandoned Makurdi Railway Station through the grading of the rain lines and commissioning of a 68-seater Air conditioned passenger coaches of train at the station.
Performing the ceremony in Makurdi, the state capital, President Jonathan said the commissioning of the rail system in the state was a testimony of the commitment of his administration to resuscitate the rail sector which has been abandoned over thirty years and to deliver on his promises to citizens of the state in particular and the country at large.President Jonathan who was represented by his vice, Architect Namadi Sambo, said the transportation sector was one of the key sectors his administration has focused on to ensure the economic development of the country, noting that with the revival of the rail system, trains can now carry passengers from Makurdi to Enugu; Makurdi to Kafanchan, Jos, Bauchi and Gombe states as well as from Makurdi to Kaduna states respectively.The president said, the vision for the revival of the transport system is designed to be implemented in three phases including: System Transition, System Modernization and System Stabilization, stressing that in keeping with the commitment to the development of infrastructure and comprehensive service delivery, the federal government has in addition to rehabilitating the rail network, procured a number of rolling stock and refurbishing of existing ones especially the coaches and wagons to put the system fully on track.Minister of Transport, Senator Idris Mohammed and Chairman Board of Directors of the Nigeria Railway Corporation, Alhaji Bamanga Tukur said the restoration of the rail services will not only facilitate and enhance cheaper movement of people and goods, but go a long way to generate employment opportunities to the teeming unemployed youths in the affected states.Senator Mohammed particularly described the event as a significant milestone in the life of the present administration, and urged the authorities of the Nigeria Railway Corporation (NRC) to ensure adequate and timely maintenance of the fleet, stressing that under the modernization phase of the 25 years vision plan for the Nigeria railways, intensive efforts were been made to complete the modernization and rehabilitation of the Tafe-Ajaokuta line and the signaling and telecommunication components.He charged the people of the state to take full advantage of the great opportunities created by the restoration of the services.In his remark, Governor Gabriel Suswam expressed enthusiasm over the revival of the rail system in the state which he said has gone comatose thirty years ago saying the gesture has put smiles on the faces on most families who considered themselves as been thrown out of job. Suswam blamed successive governments for paying what he called lip services in their avowed quest to revive the transport system, and commended President Jonathan’s transformation initiative and also urged Nigerians to support his re-election to reap more dividends of democracy.However, in separate remarks, respondents expressed mixed feelings on the new rail transport system in the state. While others commended the federal government for such prompt project to alleviate transportation challenges and ease the flow of goods to other states; a few people still remained sceptical. An anonymous source, who is an artisan, along the Tito gate -Railway line axis, said the sudden revitalisation of the rail road is suspicious. He expressed his displeasure at the fact that the project had to be rushed, in time with the president’s visit. In his words, “…this rail road was left unkempt since before I was born, but just yesterday, it was hurriedly tarred and graded.” He expressed hope that the project would stand the test of time and have a lasting effect on the transportation of people and goods easily. ?