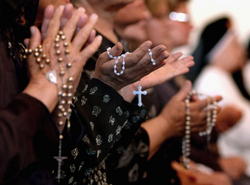 President of the Catholic Bishops Conference of Nigeria (CBCN), Archbishop Ignatius Kaigama, said Nigerians should avoid hasty generalisation, as the statement of one Catholic priest cannot be taken to represent the voices of more than 30 million Catholics in Nigeria.

Kaigama told THISDAY that though Mbaka could not have been speaking for the Nigerian Catholic Church, Nigerians should avoid making unguided statements and hasty generalisation on national issues like the 2015 general election.

The CBCN President said that it is completely out of place for a Catholic priest to be partisan.

“I tell you, even the Canon Law forbid a priest to engage in partisan politics,” Kaigama said.

Asked if there would be punitive measures meted out to Mbaka, Kaigama said: “If the law has been abused, we will ensure that we enforce the law. In this case, it is not the Catholic church; the church did not send him to say those things.

“Mbaka belongs to a diocese, so if the Bishop finds out that he has fallen out of line, the Bishop can call him to order,” he said.

“Mbaka is just expressing his opinion, if we want to make a political statement, we know how to do it. That we keep quiet and we are marginalised, does not mean we don’t have strength. With more than 30 million Catholics, we have the strength,” Kaigama submitted.

The Archbishop of Jos argued that there was no public uproar when the same Mbaka assured the first lady of continuity.

His comment had elicited public outcry, especially, among the teeming Catholic population in South-east and South-south parts of the country where President Jonathan has a strong support base.