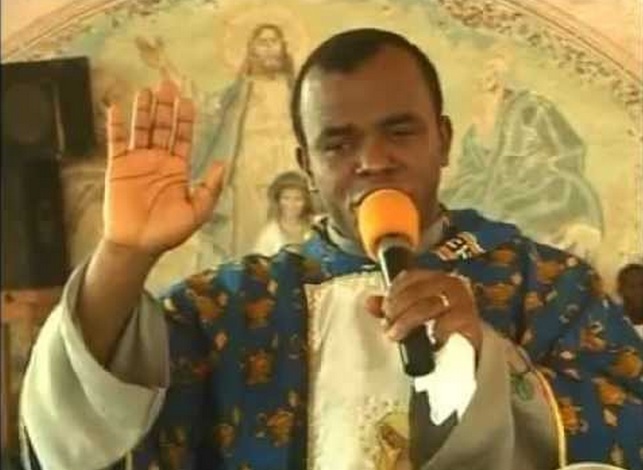 Enugu Catholic priest and founder of the Adoration Ministry, Rev. Fr. Ejike Mba­ka, yesterday raised the alarm that he has been receiving threat mes­sages following his New Year eve mes­sage where he said that Nigeria would be doomed if President Goodluck Jonathan is re-elected.

In a sermon at the Christ the King Catholic Parish GRA, Enugu, yester­day, Rev. Mbaka said if such threats could move him, he would not even be standing before the congregation that morning, SUN Newspaper reports.

He declared: “Tell them I am not afraid of them. I have said what I was asked to say. The only word I have for them is Isaiah 54:15,17: “Surely they shall gather, but because the gathering is not of God they shall scatter. No weapon fashioned against me shall prosper.”

“They said Buhari gave me money, but I have never met with Buhari. I don’t know him in person. I only delivered the message I was given and I stand by that message because the future of this country is bleak with Jonathan on the saddle.”

Mbaka said before he gave the December 31, 2014 message, he had called Mrs. Patience Jonathan sever­ally but couldn’t get to her.

Said he: “When she came here, I told her to give me her number so that I could give her messages, but thrice she refused. It was later she told one of the pastors with her to give me his number. “

“So, before that message, I had called the number for two weeks but it was always the Personal Assistant to the pastor that picked the calls. “

Mbaka, who warned that Nigeria needed change, repeated that if Jona­than was re-elected for another tenure, “the next four years will be hell for the country. People are crying of hanger but then you will see what is hunger.”

“Father Ejike Mbaka Does Not Speak For The Catholic Church” – CBCN

Father Mbaka Ought to Be Sanctioned For His Statement – Bishop Onaiyekan