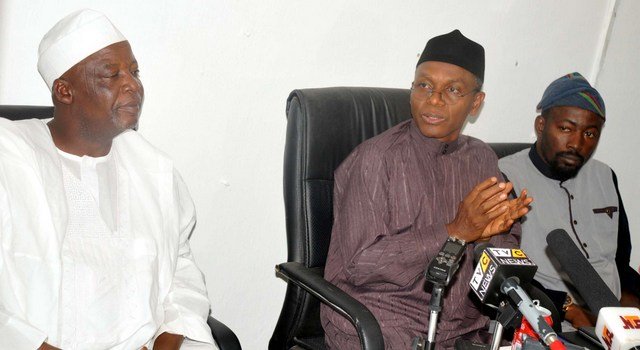 The gubernatorial candidate of the All Progressives Congress, APC, in Kaduna State, Nasir El-Rufai, said he has uncovered plans of President Goodluck Jonathan to lead Nigeria into war in order to stay in office beyond 2015.

He said President Jonathan and his associates were trying to do that in order to bring to fore the part of constitution that states that when there is war the country cannot hold elections.

The former FCT minister said his party and Nigerians would not accept the plot as elections must hold in all parts of the country as scheduled by the Independent National Electoral Commission, INEC.

PREMIUM TIMES reports that El-rufai said the ruling party was escalating insecurity and disintegrating the nation.

“Jonathan is leading the country into war in order not to have election in 2015 so he can enjoy additional six months or thereabouts as stipulated in the constitution,” he said. “But we will not allow that to happen.

“Everybody in PDP is on his own. Whereas, in APC, we are working together in unity as a party, from counsellor to president.”

When he was questioned on his plans for Kaduna should he emerge state governor come 2015, he said Kaduna was different from Abuja, but quickly added that if people elected him, it meant they wanted change.

“I can address the challenges facing the state,” he said. “This is the first time that a sitting governor in the state would be that tensed up to the extent that he’s saying I am not from Kaduna.

“I want to build a state where there will not be indigene or alien. A child born today is already owing N15, 000 debt. We will improve on Internal Generated Revenue to get things done the way they should be.”

He frowned at being referred to as controversial, saying he only tended to get things done even when others thought such a task was difficult, which according to him, got him attention from former President Olusegun Obasanjo.

“If I was controversial, it would have been known before I became FCT Minister,” he said.