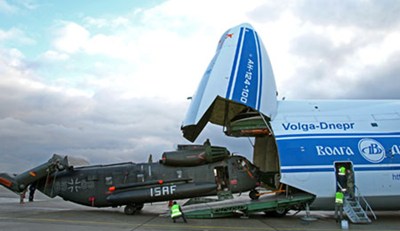 France has confirmed that the two helicopters found aboard the seized Russian manufactured Antonov aircraft in Kano on Saturday, belongs to the French army and is part of the shipment meant to reduce the size of its military intervention in the Central African Republic (CAR).

It added that the helicopters, light Gazelle, which were headed for Ndjamena, Chad, were part of France’s efforts to support regional cooperation against terrorism as agreed by the Heads of State of Nigeria, Niger, Chad and Cameroun at the security summit held in Paris in May 2014.

The Ambassador of France to Nigeria, Mr. Jacques Champagne de Labriolle, in a statement issued in Abuja yesterday night, said the plane which was chartered from a Russian company, 224 Flight Unit, was diverted to Kano airport as air traffic conditions in N’Djamena were too dense for landing.

The Russian crew, he said, decided to fly to Kano, being the closest airport, to refuel and then proceed to N’Djamena.
He added that the plane was given diplomatic clearance by Nigeria’s Ministry of Foreign Affairs.

There was absolutely no weapon and ammunition on board the aircraft, the statement read, adding that “due to the nationality of the aircraft and nature of the cargo, local airport Nigerian authorities decided to check the flight plan, the clearance and cargo before authorising the plane to leave”.

The ambassador, in the statement, further explained that after official information had been supplied by the French Embassy, to the satisfaction of Nigerian authorities, the authorities announced that the plane would be authorised to continue its flight to N’Djamena.
“The use of chartered flights of various nationalities for military cargo transport is a standard international practice; it is used by many nations and is coherent with commercial competition to reduce cost of such transport operations.

“The use of Russian companies to transport French military equipment is common practice,” Champagne de Labriolle said.
The plane was chartered on December 6, 2014, the Ambassador added.