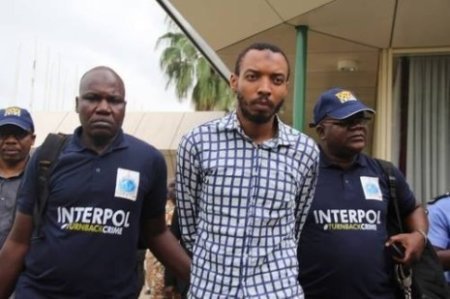 The alleged mastermind of the twin bomb explosions in Nyanya, a satellite town of Nigeria’s Federal Capital Territory, Aminu Sadiq Ogwuche, has demanded for 100 million Naira from the Department of State Services (DSS) as damages for unlawful detention. Ogwuche also demanded a public apology in two national dailies.

Channels Television reports that in a lawsuit filed for enforcement of his fundamental human rights, Ogwuche through his lawyer, Mr Ahmed Raji, told the court that his continued detention by the State Security Service was illegal and unconstitutional and asked the court to order his release or his trial.

At the proceedings, Ogwuche’s lawyer urged the court to discountenance section 27 of the Terrorism Act which the DSS was relying on to detain his client.

He argued that the said section was inferior to the constitution which stipulated a time frame within which an accused person should be arraigned.

According to him, the continued detention of the accused without prosecution is illegal and unconstitutional .

Mr Raji asked the court to order the DSS to pay Ogwuche 100 million Naira as damages and a published apology in two national dailies as compensation for unlawful detention.

He also requested that the court should make an order releasing him on bail and preventing the DSS from further arresting or detaining him, or in the alternative charge him to court within 48 hours of the court granting his orders.

After listening to the accused person’s lawyer, Justice Adeniyi Ademola adjourned the case for the prosecution to show cause as to why the orders should not be granted in favour of Ogwuche.

On November 24, the two-count charge brought against Ogwuche was struck out by a Federal High Court in Abuja.

The two-count charge was struck out by Justice Adeniyi Ademola for want of diligent prosecution by the Inspector-General of Police and his prosecutors.

The suspect, who was in court, however, was not discharged, as he is been detained by the Department of State Security Service.

Ogwuche had earlier asked the court to compel the Attorney-General of the Federation and the SSS to either charge him to court or set him free.