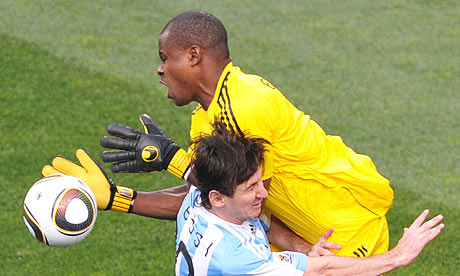 BBC African Footballer of the Year nominee, Vincent Enyeama, speaking on BBC yesterday explains why he deserve to be winner of the award. Read transcribed statements by  the Super Eagles keeper, Enyeama.

“I think I deserve the nomination. I had a great year and a great World Cup. It is the first time an African was the best goalkeeper of the World Cup.

“Like, Ok, I was good at scoring goals and go back in goal to defend the one goal I scored. Nah, it was that I started jumping on the floor with the ball as early as three, four, so I guess that was maybe when God decided I would be a goalie.

“I can’t really remember the moment I decided to be a goalkeeper because I enjoyed playing outfield as well as being in goal.
“I was good at scoring goals and then I would go back in goal to defend the one goal I scored.

“But I had started jumping on the floor with the ball as early as three or four years old, so I guess that was maybe when God decided I would be a goalie.

“I got inspiration from Peter Schmeichel, the former Manchester United goalkeeper. He used almost everything to make a save. Even though Edwin van der Sar was kind of my role model, Schmeichel brought in a different kind of goalkeeping. So I’ve been trying to do that, it’s very difficult because then you open yourself to risk of injury when you throw your legs around – but you don’t care because there’s no more power, you just throw every part of your body in the way. It’s what works.

“As Nigerians we’ve been eager for someone to win an award. For some reason we’ve not won anything since Jay Jay (Okocha) in 2004. We’ve not been there, we’ve not been that lucky, we’ve always been overlooked or we’ve not been up to the standards of the greats. So if I end up winning, it would be big for me, for my family for Nigerians,” concludes the former Enyimba player.

Lionel Messi Unsure Of His Future At Barcelona