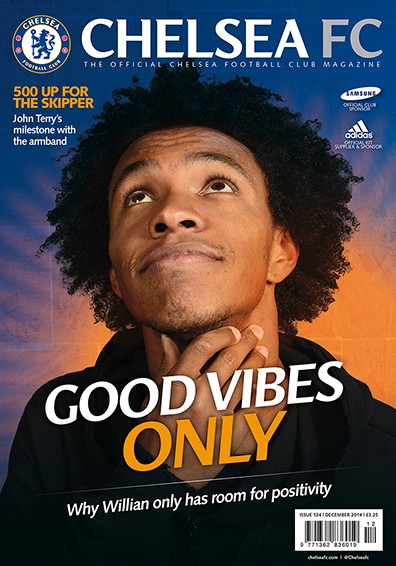 Brazilian attacker, Willian Borges Da Silva joined Chelsea in August 2013 and since then has appeared for the Blues 56 times but has only managed five goals for the premier league leaders since then.

If Willian’s return of goals can be questioned, his  work rate for the Blues can’t. Speaking to the new issue of Chelsea FC Magazine, the 26-year-old said even his manager, Jose Mourinho has asked him to improve on his return of goals:

‘One thing I have in my mind is to score more goals – I am desperate. Mr Mourinho has told me this before. He knows, and I know, that I should get more goals.

‘I’m very happy with my all-round game and my form so far this season, but I’ll be a lot happier if I am scoring more goals. That would be good for the team as well.’

The winger who arrived Chelsea from Russian side, Anzhi after previously playing in Ukraine for Shakhtar Donetsk also spoke of the demands of the English Premier League:

‘(The intensity) was something I was prepared for when I signed for Chelsea because I could see in the games I watched on television just how intense the matches are in this country.
‘I knew I needed to be ready to put in a lot hard work. If I was going to hold a place in the team, then I would have to run my heart out in every single match I play.’

The father of twin daughters also spoke of the positive atmosphere, good vibes and team spirit at Stamford Bridge:

‘I admit that I’ve always been a bit shy’.

‘That’s my character – I’m a shy guy – but when I’m with the guys here, I like to play games and joke around, especially with the other Brazilians.