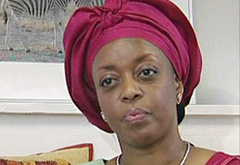 The sister of Nigeria’s petroleum minister has been kidnapped in the oil hub of Port Harcourt, police said Friday, in the latest abduction targeting a prominent political family.

Muhammad said police “were not aware if any ransom demand had been made” and the motive for the abduction was unknown but the southern oil-producing Niger Delta region has seen waves of ransom kidnappings in recent years.

One of the most prominent cases came in December 2012, when Finance Minister Ngozi Okonjo-Iweala’s 82-year-old mother Kamene Okonjo was abducted from her home, also in Delta state.

Okonjo-Iweala and Alison-Madueke are widely seen as the two most powerful members of President Goodluck Jonathan’s cabinet.

Some have sought to attach a political motive to attacks targeting Nigeria’s most powerful families.

The finance minister implied that her mother was seized because of her ministry’s crackdown on oil companies which had abused the country’s rotten fuel subsidy scheme.

But such links were never proven and Kamene Okonjo was released a week after her abduction.

Gang activity is rampant and kidnappings have at times been perpetrated on a near weekly basis. Local politicians, prominent businessmen and foreigners have been among the targets.