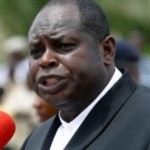 The son of Chief Diepreye Solomon Peters Alamieyeseigha (DSP), a former Governor of Bayelsa State is said to have been killed in Dubai.

The deceased, named Oyoms Alamieyeseigha, the second to the last son of the Bayelsa politician, and godfather to Nigeria’s President Goodluck Jonathan was found dead by the stairway of his father’s house in the Middle Eastern city on Saturday.

The circumstances leading to his death remained sketchy as at the time of filing this report. It was further learnt that DSP has left Nigeria for Dubai to take possession of his remains.

Only recently, 19 year-old son of popular sports broadcaster and member of the Confederation of Africa Football, CAF, Aisha Folade, was gruesomely murdered in Dubai and his killers are yet to be found by the authorities in Dubai.