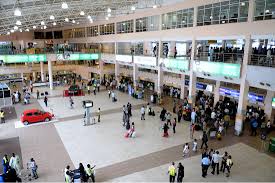 Workers were on Friday left stranded at the Muritala Mohammed International Airport when the shuttle car operators withdrew their services and disrupted the free flow of traffic.

Their complaints were that there was inadequate space for their operations.  They said they were asked to vacate the space allocated to them for operations and threatened that unless the authority settle them back to their space, they would not operate.
However, In a statement made available to NewsWireNGR, the Federal Airport Authority of Nigeria (FAAN) has said that the problem is only temporary and caused by the construction of a new terminal. The statement signed by Yakubu Dati, the General  Manager (Corporate Communications) read
“The on-going construction of New Terminal at Murtala Muhammed International Airport necessitated the relocation of the Airport Car Hire Services and other Concessionaires.”

“The Federal Airports Authority of Nigeria appreciates other stakeholders who have since re-adjusted to the temporary inconveniences for public interest.”

“It needs to be emphasized that given the massive on-going construction works at the Airport, and with safety and security at the fore front of our priorities, these re-adjustment is inevitable.”

The statement further said that any act of disruption under the guise of the inevitable condition will no be condoned.

“While regretting any inconvenience that may be experienced by stakeholders and passengers during this period, we wish to state that FAAN will not condone any act likely to lead to breakdown of law and order at the airport.”

The FAAN also said it has begun investigation into the cause of the disturbance and disruption.

“In the meantime, the Authority has commenced investigations into the remote and immediate causes of the disruptive of Limousine Shuttle Car Operators with a view to arriving at a lasting solution.”