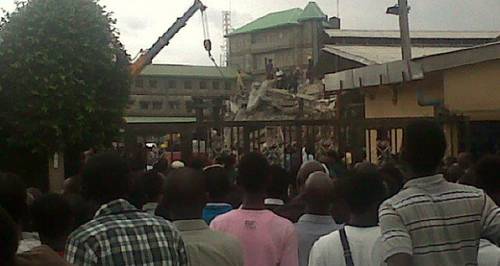 The Senate  commenced a probe of the collapse of the building within the premises of the Synagogue Church of All Nations, SCOAN which killed scores of people including south Africans, in Lagos State. The Senate, in a motion of public urgent interest, titled ‘The alarming rate of Building Collapse in Nigeria’ which was sponsored by Senator Abdulmumin Hassan representing Jigawa South West, was worried at the rate of building collapse in the country.

The Deputy Senate President, Senator Ike Ekweremadu who presided over the plenary said, “One of the reasons why buildings collapse is because some professionals delve into areas they are not very conversant with. There are instances of Surveyors doing the work of architects, doing the work of engineers or builders. When we have that kind of scenario, it is expected that the building may not have the required quality and prone to collapse.

“Secondly, a situation where those who supervise these buildings accept money and approve different stages without even visiting the sites, gives room for some kind of lapses that could lead to collapse of buildings.

“So I believe that those who are supposed to supervise buildings, regulate the industry and ensure compliance are not doing their work and where we have building collapse, those involved need to be punished and of course the professionals involved either lose their licenses or suspended from practice for a particular period to ensure that others will do their work the way it is supposed to be done.”

The senate then observed a one minute silence to honour the victim of the tragedy.

On his part, Senator Ben Ayade representing Cross River North said that the rate of building collapse in the country was capable of making the country lose its relationship with the international community as well as lose business opportunities. He said religious leaders are causing problems because any attempt at rebuking them is turned to be an attack on God.

He said, “There is a relationship between this incident and the African concept of a Church and a worship place. Religious  organisations over times have assumed celestial height in a way and manner that most times, it is also difficult for those who are responsible for enforcing regulations to be able to enforce these regulations on Churches.

“I say this from the background of experience where it is almost a sacrilege from any arm of government to go to a Church building project to stop their construction work for any reason. This is not to provide an escapist explanation for what has happened, but what is very clear also is that if you look at those who are the regulators, they lack the basic tools in engineering.

“I also want to emphasize very clearly that even when we provide all the legal and complete steps on how the way and manner to regulate a structure, the time line the periodicity is never obeyed

Meanwhile, the Lagos State Government has explained that it was waiting for a comprehensive report on the ongoing investigation into the cause of the collapse  before coming out with the appropriate position on the matter. It promised a comprehensive report to tell people what really happened to the building.

Commissioner for Information and Strategy, Mr. Aderemi Ibirogba and the Special Adviser to the Governor on Media, Mr. Hakeem Bello, appealed to the media for understanding, stressing that the state government was working closely with the committee set up by the Federal Government to unravel the true cause(s) of the collapse.

According to them, “We are all aware that the Federal Government has set up a committee, what we are saying is that in order for us not to pre-empt  that committee and hold anyone responsible the best thing is for us to put this conference on hold.

“Agencies of government are working together so that at the end of the day we will have a comprehensive report. Before that is out, it will not be right for us to tell you the situation.”
He assured that as soon as investigation is concluded, the state government would come out with a position.

The commissioner said, “We know that time is of essence here and I believe the committee will work within the shortest time possible. For all your questions and concerns, I believe the comprehensive report will be exhaustive”.

T.B Joshua Must Not Be Allowed Into South Africa – ANC Youths