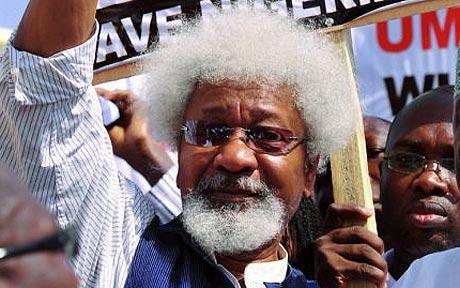 We have asked, have we as a nation lost moral guardians, or is it only the All Progressives Congress (APC) that is the strong voice which calls for the halt of our dangerous slide into failed state.

Professor Soyinka’s moral crusade dates back to 50 years, he came to limelight on the eve of the Nigeria-Biafra civil war and has remained consistent in the revival and restoration of our human dignity. He is here again to warn that the nation is drifting into a state of war.

CNPP agrees with the Moral Guardian that, ‘I am compelled to warn that anything that Stephen Davies claims to have uncovered cannot be dismissed out of hand. It cannot be wished away by foul-mouthed and cheap attempts to impugn his integrity – that is an absolute waste of time and efforts.’

Going further he said, ‘ Of the complicity of the ex-governor Sheriff in the parturition of Boko Haram, I have no doubt whatsoever, and I believe that the evidence is overwhelming.’

Regarding General Ihejirika, he said, ‘I have my own theories regarding how he may have come under Stephen Davies’ searchlight in the first place, ending up on his list of the inculpated. All I shall propose at this stage is that an international panel be set up to examine all allegations, irrespective of status or office of any accused.’

In league with other patriots, we concur with the Moral Guardian that, ‘The unleashing of a viperous cult like Boko Haram on peaceful citizens qualifies as a crime against humanity and deserves that very dimension in its resolution. If a people must survive the reign of impunity must end.’

CNPP also challenges President Goodluck Ebele Jonathan, GCFR, C-in-C to come out clean to name  the Central Bank of Nigeria official alleged to be the conduit pipe of Boko Haram funds; as the Noble Laureate said the name has been disclosed to Mr President.

The Soyinka we know, he doesn’t take prisoners and it may not be in the best interest of our dear President, to fall into the narrative of the Moral Guardian that he can only act, ‘ When he is ready to abandon his accommodating policy towards the implicated, even the criminalized, an attitude that owes so much to pre-election desperation – when he moves from a passive’ letting the law to take its course’  to galvanizing the law to take its course, we shall gladly supply that name.’

To us unravelling the masterminds, sponsors, and sympathizers of the monster dubbed Boko Haram is the first step in stamping out the insurgency.

Finally, we join the Moral Guardian in, ‘Femi Falana can safely assume that he has my full backing and that of a number of civic organizations – if is compelled to go ahead and invoke the legal recourses available to him to force Sheriff’s prosecution…’