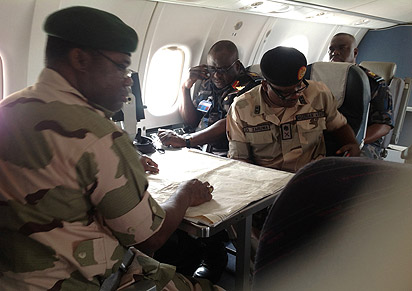 The Chief of Army Staff, Lieutenant General Kenneth Minimah Tuesday warned wives of soldiers who recently protested against the posting of their husbands to the north eastern part of the country never to repeat such protest as the military authorities will not hesitate to throw them out of the barracks.

Lt. Gen. Minimah also spoke strongly on the recent mutiny by soldiers in Maiduguri and the issue of saboteurs, who he said, have found it necessary to connive with insurgents in order to rubbish the efforts of the Nigerian army and the federal government to defeat the insurgents.

NewsWireNgr had reported earlier that 120 soldiers had on saturday last week abandoned their weapons and uniforms, refusing to confront the Islamist Terrorist sect, Boko Haram in Borno state.

Addressing soldiers of the 82 Division of the Nigerian Army, Enugu during his familiarisation tour of the Division, Lt. Gen. Minimah said categorically that the wives of soldiers must never attempt any form of protests again as doing so would attract the wrath of the military authorities.

“Your wives cannot dictate how you should be employed. Bring your wives up in the normal regimental ways of the army,” he told the soldiers. “Protests by soldiers’ wives is absolutely wrong. Soldiers wives have no role in the Nigerian army,” he added. “If you are tired of the army, you quietly pack your things and go away; don’t come to ridicule the army,” he warned the soldiers.

Lt.Gen. Minimah, who apparently referred to the mutiny by some soldiers in Maiduguri, Borno State, re-emphasised that, in line with the military law, mutiny is punishable by death sentence where the offender is found guilty. “Mutiny is death sentence if you are found guilty; you face firing squad,” he restated. He advised soldiers and those who might want to mislead them into committing mutiny to always study the military law so that they would appreciate the enormity and implications of their actions.

The COAS also condemned the activities of saboteurs who have undermined the efforts of the army in fighting the Boko Haram insurgents in the North Eastern part of the country. He said that the military authorities will fish out the saboteurs and give them punishments due to them. “We can’t be fighting the insurgents, and some other people will be conniving with the enemies to undermine our efforts,” he warned.

Lt.Gen. Minimah also spoke on discipline, loyalty, patriotism, welfare of the soldiers, stressing that the army must win the war against Boko Haram “very, very soon” with the arrival of the brand new weapons and equipment procured by the federal government. “It will cost so much but the federal government is prepared to foot the bill,” he said.