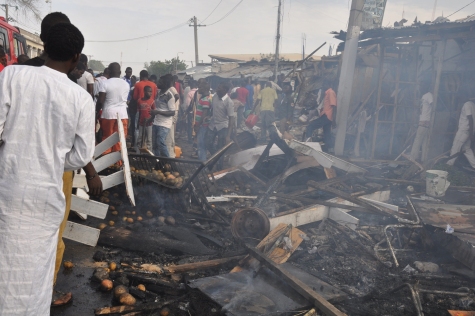 While attack is on here are some safety tips by the PR Nigeria:
1.       Be calm. You are the only one who can help yourself.
2.       Lay flat. Most explosives used by suicide bombers are designed to burst in a flower bouquet pattern to throw the shrapnel horizontally between two and six feet above the ground. This pattern increases the chances of hitting the human torso and head by a shrapnel. Therefore, the best place to be in an event of an explosion is to lay flat on the ground.
3.       Keep your mouth open and breathe in small intervals. The most lethal aspect in an explosion is not shrapnel or heat, it is the blast overpressure. The blast wave travels at supersonic velocity and severely affects the air-filled organs like lungs, kidneys, and bowels. We naturally tend to take a deep breath and hold it in emergencies. However, this proves lethal in a bombing situation, since our lungs become like a pressurised balloon to be ruptured by the blast wave. The majority of victims in a typical suicide bombing die from internal bleeding in the lungs. Only 6% on average die from shrapnel wounds. Your chances of injury with empty lungs are far smaller compared to holding your breath.
4.       If things are falling around you, crawl under a sturdy table or a solid object, and remain there for at least one minute.
5.       Be as far as possible from glass or fixtures, like windows, mirrors, cabinets, and electrical equipments.
6.       Adhere to instructions from security and responders personnel. If an evacuation is ordered, leave the building as soon as you can.
7.       Remember to assist the disabled around.
8.       Do not move seriously injured persons unless they are in obvious, immediate danger, such as a building collapse or fire.
9.       Once out, keep as far away from the building as possible.
10.   Reduce your lateral profile – while laying on the ground, try to lay on one side and use your arms to protect the exposed eye.
Under the debris:
1.       Cover your mouth with a handkerchief or clothing.
2.       Tap over and over on a pipe or wall so that rescuers can hear where you are.
3.       Preserve your energy. Shout only if there is no other choice. You inhale enormous amount of dust when yelling.
4.       Stay calm and think of things that relax you and make you happy.
5.       Avoid unnecessary movement so you don’t kick up dust.
6.       If possible, use a whistle to signal rescuers.
After the attack:
1.       One event can be followed by another, so do not rush towards the blast scene.
2.       Duck and cover.
3.       Leave the building as quickly as possible. Do not stop to retrieve personal possessions or make phone calls.
4.       Open doors carefully; watch for falling objects.
5.       Avoid using telephones, mobile phones and hand radios. Electrical sparks or signals could trigger other bombs.
6.       Move away from side-walks or streets to be used by emergency officials or others still exiting the building.
7.       If you or others have life-threatening injuries, such as severe bleeding, difficulty breathing, chest pain or burns, provide or seek first aid and get help from officials or others at the scene.
8.       If you or someone else has minor injuries, seek first aid as a first step until those more severely injured can be cared for first. If possible, go to a hospital that is not in the immediate area of the blast. Hospitals closest to the blast(s) will quickly become crowded.
9.       Listen to emergency officials at the scene. If no one is near you to give instructions and you are in the immediate area of the blast(s), leave as soon as you can.
10.   To keep safe, move away from the area. Avoid crowds, unattended cars and trucks, public transportation, and damaged buildings.

National Conference Recommends Creation Of 19 New States Of The Federation