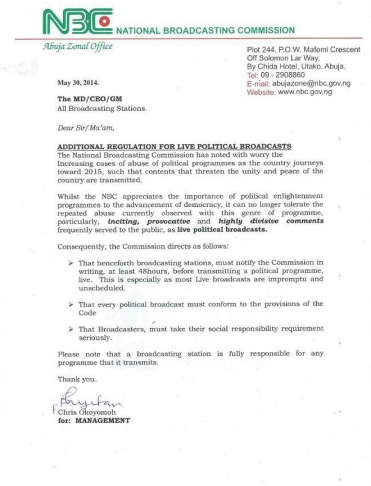 In the letter signed by Chris Okoyomoh, on behalf of the management, the NBC warned that the Commission will “no longer tolerate the repeated abuse currently observed with this genre of program, particularly, inciting, provocative and highly divisive comments frequently served to the public, as live political broadcasts.”

NBC in the letter directed MDs and CEOS of all broadcasting stations to notify the commission in writing, at least 48 hours, before transmitting a live program. It also warned that all political broadcasts must conform to the provision of the Code.

As Nigeria approaches the 2015 election there are indications that the agency charged with monitoring the nation’s television stations has become jittery over the willingness of Nigerians to express their displeasure on the state of the nation live on air. Analysts read this warning as a signal that the powers-that-be are angered by the negative tone of most broadcasting on TV and their acolytes at the NBC are willing to crackdown on broadcasting stations to please their political godfather.