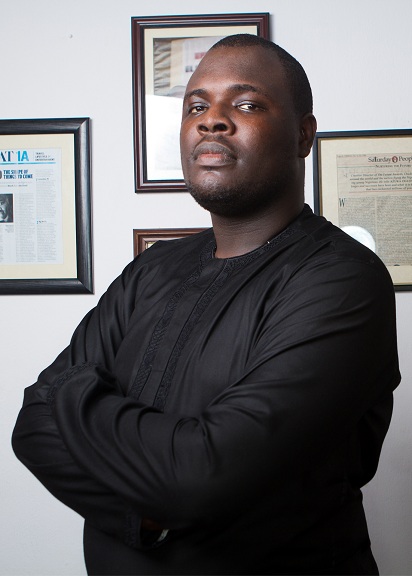 On Madness & Change: By Funmi Iyanda

Something went wrong with my parenting. Whilst watching a TV talk show host yesterday, my 13 year old turned and said to me, “She’s not very good is she? She has no ability to express emotions and does not present any real issue but she is doing something right mum, she’s not presenting the issues. People don’t care about the issues or they care but they don’t really want to do anything about them.” I blame myself, as a bad single mother l have raised a rather wise young lady.

I was watching the champions’ league finals yesterday with friends and l must whisper this sacrilege to you, l don’t really care about foreign league football. l just can’t muster enough emotional connection. I don’t mind nations playing football but l watch leagues as a social exercise and to see young athletic men, run, flex, fight and possibly take off their shirts. I particularly did not give a damn about yesterday’s game because the lack of urgency or agency l sense on arrival in Nigeria chilled me somewhat and because, a few bombs did go off in Jos rather inconveniently during the match.

Then l went on Twitter to observe people’s legitimate struggle to be allowed just this piece of distraction from the relentless onslaught of bad news. Then one of my friends turned and said, “look Funmi once you live in Nigeria you have to deaden yourself to all this or you’d run mad.”

She’s absolutely right but what she misses and l think that is the bit that has not sunk in, is that we are already mad.

The mad cannot get mad at the bad.

I met Chude Jideonwo as a 16-year-old who had published a prophetically titled book, His Father’s Knickers. His intelligence shorn blindingly, his wit quick and his hunger for life and passion for country beautiful to behold.

In the intervening years he has gone from student to journalist, TV producer/presenter, media entrepreneur, activist and most importantly a living breathing totem of his generation’s struggle with light and dark.
“Are We The Turning Point Generation?” is as much about Chude as it is about the generation he so vociferously defends, inspires and harangues.

This collection of essays, keynotes, and public addresses from Chude is fascinating.

It gives moral authority to the youth on the basis of non-responsibility for the present state of affairs, but age is a bastard. The chronology of the writings reveal an initial, somewhat charming lack of awareness of participation and thus responsibility juxtaposed with an evolution, slowly dawning, of part complicity, curse of history, deeper understanding of the underlying causes and a fear of becoming another historical clique.

Chude, leading his generation, grappled with issues of government, its structure and lack of it, systems and institutions, capacity and competence, leadership and moral compass, the nature and denaturing of change given knowledge of history and wisdom of interpretation or lack of.

The quintessential cross road metaphors running unwritten through the well argued points would make Esu the Yoruba deity guarding the intersection between our dark and light sides chuckle in glee.

But Chude may not like that analogy. He, like many in his generation is dignifiedly religious, (and) some of the best essays in this book are on religion. These are the points when his voice and tone is evangelical and truest in his struggle to make sense of the lavish live styles of non tax paying, non corporately governed pastors or challenging them to get on the side of the people in political advocacy. He gives free passes, he withdraws them, and ultimately you sense he hopes that these leaders in religion, business, politics and civil society would be reasonable.

Chude’s and l suspect his generation’s challenge is finding the tools that will ensure reasonable behaviour from leaders and the lead.

He speak a lot and rather grandiosely about new and social media, about technology and hubs. He does not speak enough about toilets, hospitals and manufacturing plants; but then that’s because he is part of a global generation force fed neo liberal capitalism, a demonization of corruption engendered poverty and the lie of triumphant individualism.

Because he is religious, Chude does write with resoundingly repetitive but beautifully palliative rhetoric on one hand then becomes damningly judgemental of those who fall short of glory on the other. He is scathing of Nuhu Ribadu, disillusioned about Dora Akinyuli and irritated about Dbanj. However, because he is also a soul in consonance with our true realities, his more emotion-laden pieces are a cry from the heart of frustration, fear, hope, despair and courage.

Yes there are pieces that are a tad melodramatic, somewhat megalomaniac and chest thumping but then these are not un-useful especially in the young and lest one be accused of ageism, the entire premise of this book is age.

He struggles when he tries to make sense of the absurd in an admirable attempt to rally support for his events, advocacy and dissent whilst instilling hope. He gives President Jonathan many undeserved passes he was quick to withdraw. Making a case for a minister who became a friend. And rather alarmingly trying to rationalize corruption before withdrawing quickly from same position. He supported and quoted his friend Femke Van Zeiji’s assertion that .. ‘If corruption were the major reason for our lack of development then a country like Indonesia no 118 on transparency international corruption perception index not far behind Nigeria would not have made in into the g- 20 group of major economies”.

Chronologically soon after, he did a volte face, quoting and agreeing with Achebe who said- “corruption in Nigeria has passed the alarming and entered the fatal stage and Nigeria will die if we keep pretending she is only slightly indisposed”.

This reminds one that despite his stinging intellect, Chude, like those he represents, is indeed young and influencable and thus begs the need for better role models and influencers in whatever age bracket.

He admits this when he insightfully states that his struggle as a young lawyer was whether to be more like FRA Williams or Gani Fawehinmi. You can see his understandable admiration and attraction for the life less-troublesome of Williams but l silently chuckle at the way in which his mien, the occasional fire in the eye and emotional insights are very much Fawenhinmiesque. But Gani is not such a sexy idea, at least not yet and Chude, like his mates, nurtured on virtual likes, friending and trending are not too keen on being the unsexy kids, the outliners. That may come.

There are bits of this book which l love just for the language:

On Politicians- They severely threaten the morality of a nation that finds its place at the bottom of corruption rankings year after year thanks to politicians like David mark who have sodomised the populace for decades now.

On racketeers- We need to stop allowing ourselves to be done in by an army of duplicitous motivational speakers, pastors, conflict resolution experts and other change workers who insist that real change can come without real sacrifice. All we need is a Nigerian dream, they say, really is there a Ghanaian dream?

My favourite essays are ‘Why Nigeria’s homosexuality bill sickens me’, here he is faultlessly honest, despaired, enraged but with quiet dignity.

In ‘We must kill God’, he strikes similar tone of honesty, self-awareness, urgency and courage.

Finally, in ‘Achebe’s last gift to us’ he is at his best; knowing, learning, insightful, questioning, and truthful.

He writes, “our country problem is not president Jonathan lack of character, the lack of safety in aviation industry, the inability to provide security, the collapse of infrastructure in our schools or electoral practise, Achebe captured the heart of it one simple elegant statement: ‘what has consistently escaped most Nigerians in this entire travesty is the fact that mediocrity destroys the very fabric of a country as surely as a war- ushering in all sorts of banality, ineptitude, corruption and debauchery’.”

In ending this book, Chude tells a heart-breaking story about trying to find dignify for his late father’s body with a detachment easily recognisable at pain so deep it is inexpressible. He had spent a large portion of this book on pondering what sort of change, a sudden revolt or incremental cell led changes. He head and perhaps a need for time honoured human self preservation tell him the latter but l suspect that like generations before him, he knows what his heart says but the heart can only whisper these things for to face up to them is enough to freeze the heart and immobilize the body in fear.

Fittingly, he describes the youth-befriending Gov. Amaechi’s scathing indictment of his generation as equal participants in the rot whilst recognising his denouncement as a frustrated jab from one equally caught in the trap of what to do with or for Nigeria whilst trying to make a living or a lot more than a living; what he describes as the wistfulness for what might have been.

Abraham Lincoln was quoted to have said to those requiring change, make me. To make men and women reasonable or help reasonable men and women navigate difficult systems requires getting mad without being mad. It requires self-awareness, self-evaluation and a refusal to be less than one’s best self so that the bad recognises it will get no free pass and if it does not get out of the way, it will be mowed down.

To get mad without being mad requires Chude to not be FRA, Gani, Achebe, Aminu Kano or anyone else however lofty but to be completely wholly Chude so that everyone knows not to mess with a human who will stay true to himself in accordance to what is best for his society. I may use Chude as an example but l mean every living breathing maddened but not yet mad Nigerian youth.

However, if our steady decline has turned us all, young and not, into mad men and women how then does the clinically mad get productively mad? Chude has not got the answer yet but he is asking the right questions and urging his generation l quote to ‘”let’s keep the faith, if we stumble, lets rise, when we fall lets rebound, let’s refuse to let Nigeria go, let’s insist it must work, let’s keep working until it changes, let’s keep changing until we tear down the these walls. Because we can, because we have no choice, because we love this land.”

Chude and the generation he leads have not just time on their side, they do have the tools generations before lack to engage, collaborate and document their efforts. That documentation is important so that when the continuum of life rolls round the next generation, they too will not be discarded as useless on account of age if this mad max dystopia we live persists.

Back to that 13-year-old l live with who asked this morning: “So how old is Uncle Chude now?” “He’s going to be 30,” l said. “30? That’s old!” she exclaimed as she returns to exchanging pictures on Instagram with a friend in Spain.

Boko Haram: ‘Remain In The North At Your Own Peril’ MASSOB Asks Igbo’s To Return Home