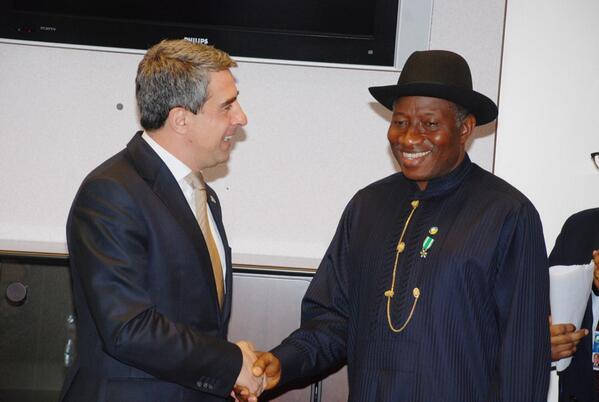 Nigeria’s President, Goodluck Jonathan, has called on world leaders to assist Nigeria identify sponsors of the Boko Haram terrorists organisation, emphasising that the world has the responsibility of holding the sponsors of the deadly sect responsible and accountable for their atrocities.

At the European Union-African Union Summit on Peace and Security holding in Brussels, Belgium on Wednesday, President Jonathan reiterated that there could be no development in Africa if the issue of insecurity was not holistically tackled, stressing that “peace and development are two sides of the same coin”.

While expressing appreciation of the government of Nigeria to the European Union for its support to Nigeria and other African countries in tackling the threat of terrorism from groups like Boko Haram and in the Sahel, President Jonathan maintained that a terror attack on one nation was an attack on all,” stressing that everything must be done to expose and defeat the terrorists.

He said: “Given the importance Nigeria attaches to the subject of peace and security in Africa, he organised a summit on “Human Security, Peace and Development: an Agenda for The 21st Century” which attracted over 20 heads of state and governments and heads of international organisations, where it was resolved that leaders must continue to strengthen existing mechanisms for national and international conflict management, and create new avenues for co-operation within and between the people”.

“In the face of these new threats and challenges, the peace and security architecture of Africa needs to be strengthened and the African standby force needs to be fully operationalised,” the president of Africa’s most populous nation said.

He said that the African Union needed to “give stronger impetus to capacity-building and logistical support to boost Africa’s capability and preparedness to take pre-emptive steps to contain conflict situations, quell violence and deal with the scourges of terrorism”.

The president said in demonstration of its desire for the development of collective security arrangement among its member states and its regional economic communities, the African Union established a security management system and the codification of standards within Africa’s Peace and Security Architecture (APSA).

The 4th EU-Africa Summit of the Heads of State and Government of European Union and African Union kicked-off on Wednesday, with the participation of more than 60 African European statesmen, as well as representatives of international organisations.

Under the theme “Investing in People, Prosperity and Peace”, the summit will taking place on April 2-3 and will also discuss investment, climate change and migration.

Some European countries have come under criticism over their immigration policies, as scores of African migrants have lost their lives in attempts to enter Europe through the sea.

Lagos Deserves More Than A Minister Of State, We Gave You 1.7million Votes – Fashola Tells Jonathan