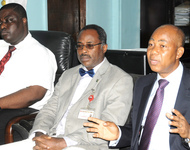 The National Association of Resident Doctors of Nigeria (NARD) on Wednesday urged the Federal Government to implement all agreements reached with the association on the welfare and training of resident doctors.

The president of the association, Dr Jubril Abdullahi, told newsmen in Abuja that failure to implement such agreements would necessitate another round of strike by the doctors.

“At the end of the NEC meeting, we resolved that the Federal Government should look into the MoU we signed on Oct. 21 and implement all the items contained.
“We do not, in all sincerity and honesty, believe that going on strike serves the interest of each and every one of us.

“Rather, we prefer to dialogue but we are always forced by the government to disrupt services before genuine discussions will start.
“We will try out best to avoid the strike assuming that the government does what is right to implement agreements.
“What we are talking about implementation of agreement is that once an agreement is signed we need to see a process in place towards the actualisation of the terms.
“But what we have is a situation whereby you sign something, some things are done, some are forgotten until you agitate again, so this is what creates a vicious circle.
“For NARD, in event that we do not reach an agreement, because we want to meet on April 3 with the Federal Ministry of Health.
“If no substantial gains have been made we are likely going to resume our industrial action in May 2014.’’

Abdullahi also decried what he described as indiscriminate deductions from members and urged the relevant authorities to stop the practice.

He also urged the Federal Government to pay resident doctors their teaching and rural posting allowances.

“It is based on this selected model that personnel and professional development can be measured and we can eliminate this ceaseless competition for superiority amongst health care workers.

He urged the governments of Oyo and Osun to reposition the Osogbo and Ogbomosho campuses of Ladoke Akintola University of Technology (LAUTECH) Teaching Hospital to enable them to function optimally.

The News Agency of Nigeria (NAN) recalls that the association suspended its 24 day old strike on Oct. 24, 2013 after an MoU was signed between the government and NARD on Oct. 21, 2013.

NAN also recalls that other agreements include the implementation of the IPPIS payment system for some of its members and welfare of its members in Federal Medical Centre Owerri.

Related Topics:NigeriastrikeFeaturedResident Doctors of Nigeria
Up Next

‘I Will Cross The Border & Join My Kinsmen In Cameroon, If Nigeria Disintegrates’ Lamido Of Adamawa At Confab