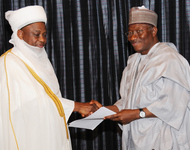 President Goodluck Jonathan on Wednesday reiterated the commitment of his administration to be fair and just to all Nigerian irrespective of religious and ethnic affiliation.

The president said this in Abuja when he met in closed-door with a delegation of the Nigeria Supreme Council for Islamic Affairs (NSCIA).

The delegation was led by the Sultan of Sokoto, Alhaji Sa’ad Abubakar and the Secretary General of the council, Prof. Ishaq Oloyede.

Oloyede, who spoke to State House correspondents after the meeting, said the president had told them that the administration did not “deliberately marginalised” the Muslims as reported in the media.

There were media reports alleging lopsidedness on the composition of delegation to the on-going National Conference.

Oloyede said that the president had asked their delegation to convey to the Muslim faithful in the country that there was no deliberate intention to marginalise any group whatsoever.

He said the delegation was in the villa to consult and complain to the president on the feeling of marginalisation by the Muslims as majority of delegates to the national conference were Christians.

“What we came to discuss with the president is to consult with Mr. President and we are happy we consulted with him, and he has given us reasons to re-assure the Muslims that Muslims in Nigeria are not deliberately marginalised.

“The president said that if there are issues that are not as they ought to be, they were not definitely deliberate.

“It is also proper to assume that a leader will always be just even if there are mistakes thereafter.

“We just felt that we must convey the feelings of the Muslims in Nigeria to Mr. President and he has given us his words to re-assure the Muslims community that he is a genuine and committed Christian who will not be unjust to others.

Asked whether such feelings of marginalisation were necessary, Oloyede responded: “may be because you are not a Muslim.

“If you are a Muslim you will know the feelings of the Muslims presently about the composition of the National Conference.”

It will be recalled that the apex body of Muslims in the North, Jama’atul Nasril Islam (JNI) had alleged that the selection of delegates to the conference was lopsided.