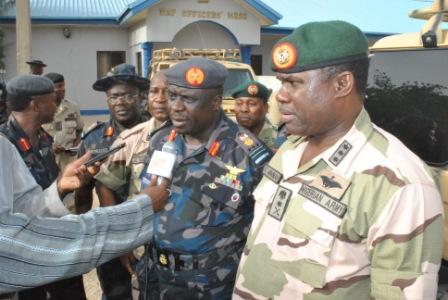 The Chief of Army Staff (COAS), Lt.-Gen. Kenneth Minimah, says the Army will not rest until peace is restored in communities affected by Boko Haram insurgents.

Minimah made this known during the farewell ceremony in his honour by the Infantry Corps Centre, Armed Forces Command and Staff College (AFCSC) Jaji, Kaduna State, on Friday.

“We shall not rest until peace is restored to all affected communities. As we forge ahead, we will refocus our priorities to training, equipment, welfare and motivation of our troops,’’ he said.

He said the current security situation affecting most parts of the nation necessitated the need for security operatives to strategise toward resolving it.

“Our country is going through a period of enormous security challenges which are daunting, but surmountable.

“Nigerians demand that we rise to the occasion through renewed commitment and reawakening of the warrior spirit in us.

“A lot is already being achieved in our ongoing operations to rid our country of terrorists and criminal elements,’’ he said.

He commended the army and other security operatives for their efforts toward resolving the security challenges that had bedevilled the nation.

“Our resolve to discharge our constitutional roles to foster unity, stability, peace and progress of our dear nation is non-negotiable,’’ he said.

News Agency of Nigeria (NAN) recalls that Minimah was before his appointment as COAS, the Commander at the centre.

He, however, officially handed over the Infantry Corps Centre to the new Commander, Maj.-Gen. Mohammed Abubakar.