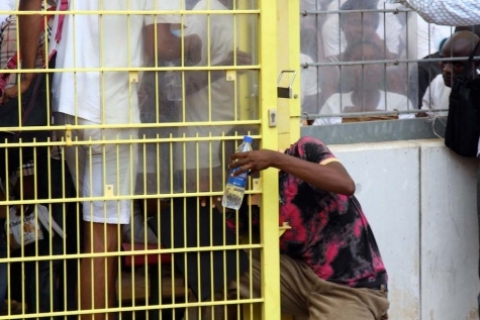 Seven Nigerians were Saturday morning killed during a stampede at the National Stadium, Abuja — the Federal Capital territory (FCT) venue of the ongoing recruitment test by the Nigeria Immigrations Service (NIS).

Job-seekers in their thousands thronged the stadium to write the test with only one entrance to the 60,000-capacity stadium was made available.

The stampede led to the injury of several others and they were said to have been admitted at the National Hospital in Abuja.

The recruitment exercise by the Nigerian Immigration Service took place at over 6 various centers nationwide with a massive turn out of applicants at the various stadium nationwide.

At the National Stadium, Surulere — venue of the Lagos recruitment exercise — the applicant started protesting at some point stopping the road users thereby leading to traffic logjam.

Social media was agog over the disturbing images from the mammoth crowd at the centers, an indication that the rate of unemployment in the country has become a national tragedy.

In 2011, the National Bureau of Statistics (NBS) put the country’s unemployment rate at 23.9%.