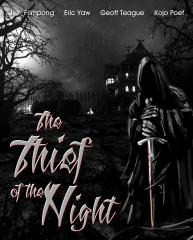 There was this house located near the grave
In which one day the spirits decided to out-pour
And in this house lived a lonely man
Who the malevolent spirits played this game on
I remember it was a plutonian night.
I also remember how sleep eluded him that day
On his bed, he heard a movement
As of something sinisterly terrifying
With the help of delusion, the spirits had a field day
As the clocks stopped and the knocks on the door began
With no invitation, the thief of the night entered
Words fail me in the description of this horrible figure

Of all the fears that he could have,
The very worst of dread,
The most heinous of imaginings,
Right there beneath his bed,
Was it only in his mind?
Or was reality what he saw?
The sweat was icy on his brow,
Fear ate at his core,
He knew this Thief of the Night,
Would steal what it was he had,
No earthly goods on his manifest,
It was souls both good and bad,
That the Thief was here to take,
And what had started as a shiver,
Now turned into a quake………..

Beelzebub could not more disfigure
Stare hard and long enough
And zombies appear soon enough
He tried to recall a word of scripture
Magic word to ward off a creature
Word of hope from the good St Paul
Cowed he waited the first blow to fall
Theft, deception the devil’s intention
His attention equals soul in detention
Now he wished for the morning sun
Alas his nightmare had just begun