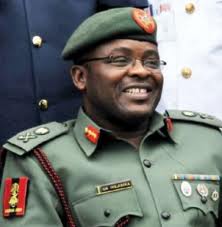 The former Chief of Army Staff (COAs), Lt.-Gen. Azubuike Ihejirika, has tasked officers and men of the Nigerian Army to be steadfast in their dedication, commitment and loyalty to work.

Ihejirika made the call on Wednesday night at a valedictory dinner to mark his retirement from service.

He encouraged the officers to prove themselves in any appointment given to them, adding that it was the only way forward.

“You cannot be loyal to the COAs if you are not loyal to your General Officer Commanding or directors. So loyalty is continuous, if you skip one you miss it.

being in the army; it will be a very honourable thing for you to say I am done with this job.

“If because of postings, appointments or promotions, you become disloyal, what do you think of the soldier and officer who is putting his chest between the bullet and us, so what sacrifice is greater than that ?”

eyeball-to-eyeball with the enemy.

According to the former COAs, these soldiers deserve every encouragement they can get from Nigerians and international community.

He said that the armed force had come a long way and things were not as bad as people thought, adding that the kind of cooperation was very cohesive.

Minimah said that the army would its best to ensure that the current security challenges facing the country was brought to an end so that the country could become peaceful.

He said the army would continue to deepen democracy.