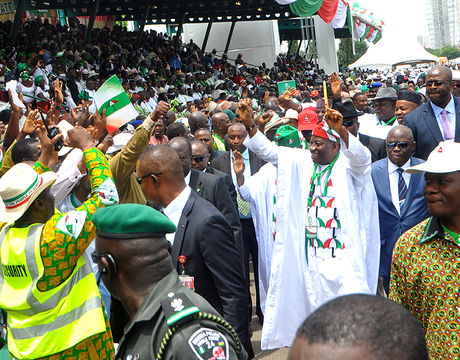 A Federal High Court in Kaduna has set March 17, 2014 for judgment on a case challenging the eligibility of President Goodluck Jonathan to contest the presidential election in 2015.

The suit by Mr. Richard Mnenga and Shuaibu Lilli, all members of the ruling Peoples Democratic Party (PDP), asked the court to order the Independent National Electoral Commission (INEC) to restrain the PDP from accepting the nomination of Jonathan as a presidential candidate in the 2015 election.

The plaintiffs all members of the PDP as President Goodluck Jonathan argue that the President would have completed eight years in office as president by 2015.

They argued, through their lawyer, Abiodun Owonikoko (SAN) calculated from May 29, 2007 and sought a declaration that he is not entitled to a tenure exceeding eight years calculated from 2007.

The plaintiffs cited Section 308 of the Constitution, that if Jonathan is allowed to contest the 2015 presidential election and re-elected, he would have ended up spending 10 years as president, which contravenes the constitution of Nigeria that permits only eight years for president.

But Fabian Ajoku (SAN),counsel to President Jonathan, argued that the plaintiffs lack “locus standi” to bring the matter before the court.

Ajoku said the suit is abusive to the defendant and as such wants the court to dismiss the suit.

Justice Evelyn Anyadike, adjourned the case, and said submissions by the counsels to both parties would be considered and judgment would be delivered on March 17.

#NewsAnalysis Healing The ‘Wounds’ Of Mining In Plateau State