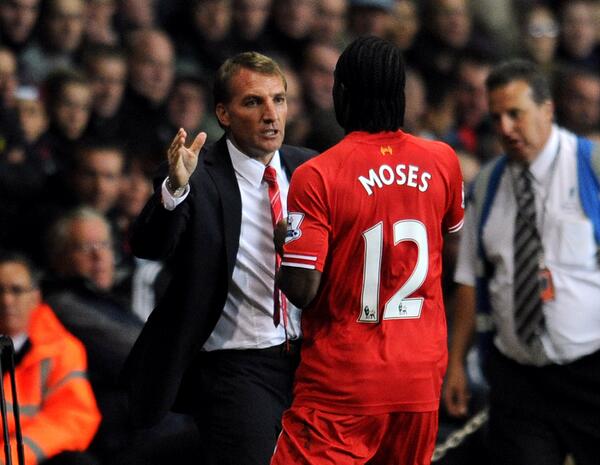 Despite being used sparingly at Liverpool, Victor Moses may remain at Liverpool next season as the Reds Manager, Brendan Rodgers has suggested. The Nigerian attacker has managed only two goals since moving to Liverpool in the Summer. Rodgers is however happy with the Warri-born Nigerian forward

“For Victor, it is very simple, He wants to remain in a position that he will remain at a big club, whether it is Chelsea or Liverpool. There is no bigger motivation than that”, Brendan told reporters

The tactician also revealed Moses is happy at Liverpool, training well and had the chances of moving permanently to Liverpool. He was quick to point out however that the Nigerian’s immediate future could only be dictated by his parent club, Chelsea

“In order to do that, he needs to be performing day in day out in training. If he does really well for us there is a possibility we will want to have him permanently, but ultimately it is Chelsea’s decision because he is their player.

“And if he has done really well then they will want to keep him. So there’s every motivation. When you sample the life of the big institutions like Liverpool then there’s not many that want to leave.

“I have known Victor since he was a young player so wanted to take him into another big club and give him that opportunity.

“Despite one or two things I have seen that were written, he has absolutely loved it. He is never one to complain. I have seen improvements in his training.

“So you have to get them up to the level – and I am not just talking Victor here – I’m talking any player. If you’re at a club like Liverpool and there are top players you have to be at that level every single day eight or nine out of 10 every day and once you do that you will be able to play with these guys.”

Maradona Attacks Pele Again, Criticizes The Awarding Of An Honorary Ballon d’Or To The Brazilian