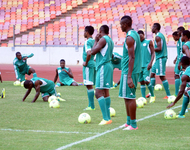 Nigeria and Ghana will renew an age-long rivalry when both sides clash on Wednesday in the semi-finals of the African Nations Championship (CHAN) in Bloemfontein, South Africa.

The News Agency of Nigeria (NAN) recalls that the Black Stars of Ghana had on Sunday defeated DR Congo 1-0 to set up a mouth-watering west African clash against Nigeria.

The Super Eagles had earlier overturned a 0-3 half-time deficit to beat Morocco 4-3 in a thrilling quarter-final match on Saturday in Cape Town.

In the competition’s group stage, Nigeria finished as Group A runners-up after losing 1-2 to eventual table-toppers Mali, and beating Mozambique 4-2 and South Africa 3-1.

Ghana, on the other hand, finished as winners of Group B after securing two 1-0 wins against Congo and Ethiopia, and a 1-1 draw against Libya.

But, with Nigeria now a major favourite for the CHAN title, the Ghana/Nigeria rivalry which dates back to 1951 will come into play while both sides’ pedigree will also be considered.

The Super Eagles are making their debut at the CHAN tournament, while Ghana have enjoyed a better level of experience at the championship with this being their third successive appearance.

The Black Stars were at the inaugural finals in Ivory Coast in 2009 where they finished second.

This was after losing 0-2 in the final to DR Congo, the team they earlier beat 3-0 in a group game.

In 2011 at Sudan, they finished 14th in the 16-team event, after suffering three losses in three matches.

Therefore, they will now be looking forward to doing better by creating what may appear the biggest upset by beating Nigeria who have the best attacking record at the event.

Ghana look to be better, with the manner of their progress so far, leading their group with seven points and winning outrightly in the quarter-finals against the competition’s inaugural champions.

Though Nigeria qualified with six points after an opening game loss, but they have made up for this by shutting out hosts South Africa.

They also created the continent’s greatest comeback record against Morocco.

Ghana have only conceded one goal, while Nigeria have conceded eight to indicate that they have a defenceline that can be breached at any time.

But can the Black Stars really do this, going by the fact that they have also been goal-shy?

The Eagles, with such a firepower oiled by Ejike Uzoenyi, Ifeanyi Ede and Barnabas Imenger Jr., as well as Rabiu Ali, should have no problem getting past the Ghanaian rear.

Nonetheless, both teams will no doubt be desperate to get the better of each other and keep on to the bragging rights between both countries.

Surely, it is going to be a match to behold at the Free State Stadium.

Related Topics:sportsBlack Stars Of GhanaSuper Eagles of Nigeria
Up Next