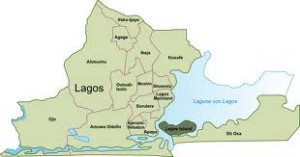 Lagos – Fire erupted at the premises of Zoom – a telecommunications company- close to the National Theatre in Iganmu-Lagos on Sunday morning, after an explosion occurred as some people were transferring fuel from one tanker into another.

The News Agency of Nigeria (NAN) reports that the explosion, which occurred shortly after 11.00a.m. caused panic in the area as many scampered to safety.

At the scene of the fire, three petrol tankers and one trailer had been burnt by noon, while firefighters were battling to prevent the fire from spreading to the warehouse of the telecommunications company.

Mr Bassey Moses, a security guard with Zoom, told NAN that some people were transferring diesel when a generator they were using sparked and caught fire.

“We were told to allow them to be parking their trucks here. One of their trucks had a fault and in the process of transferring the diesel from it to another tanker, the fire broke out,’’ he said.

According to Moses, nobody died or sustained any injury in the incidence.

NAN reports that policemen, who arrived the scene soon after the fire started, controlled the huge crowd which gathered nearby, as firefighters continued to fight the blaze.

Mr Ganiyu Olayiwola, Assistant Controller of Fire, Federal Fire Services, told NAN at the scene that he was alerted at about 11:30a.m. and mobilised four stations– Surulere, Ebute-Meta, Festac and Lagos Island, to the scene.

Olayiwola said they had been battling the fire since they arrived.

“I learnt that they were trying to transfer fuel when the fire was ignited,” he said.

He told NAN that the firefighters initially had the problem of making soapy water, but they had been able to overcome the challenge.

The Director, Lagos State Fire Services, Mr Rasaq Fadipe, also told NAN on phone at about noon that his men were also at the scene and they were helping in battling the fire.

NAN reports that as at 1:30p.m., firefighters were still at the scene and a huge smoke was still billowing into the sky.