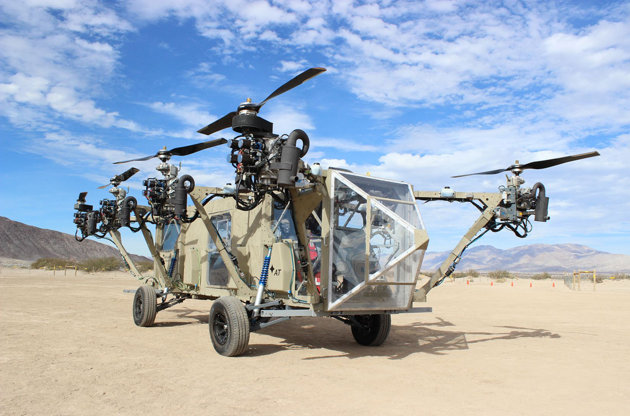 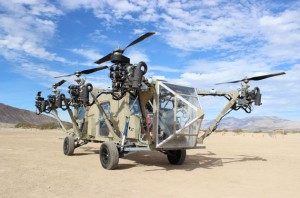 The Black Knight Transformer is the world’s first drone that combines an off-road truck with a vertical takeoff and landing (VTOL) aircraft.

It is currently being tested by Advanced Tactics, a Californian-based firm, to meet the requirements of the U.S. military for a new evacuation vehicle.

The specially made truck comes complete with eight rotors – four on each side – that will spring out for take off and then fold in while driving, all remotely operated.

Advanced Tactics, a small aerospace company, began work on the AT Black Knight Transformer in 2010 and has recently completed its first driving tests. It’s scheduled to fly in early 2014.

It is designed to be a low-cost rapid response ambulance to evacuate wounded soldiers from the battlefield or transport cargo.

Its unmanned capabilities keep pilots out of harm’s way, making it the safest casualty evacuation option.

The components of the propulsion system, including the engines and prop-rotors, are low-cost commercially available parts and the aircraft’s structure is made of modular field-replaceable components.

The AT Transformer has the ability to perform controlled engine-out flight in case of a critical component failure – meaning it can cope without all of its rotors functioning.

Black Knight also has heavy-duty suspension and drive-trains similar to those used in off-road trucks. The wheels are driven by an independent engine for speeds up to 70 mph.

After its first flight, the AT Black Knight Transformer technology demonstrator will enter a testing program leading to a full-capability demonstration in late 2014.

Advanced Tactics is looking for collaboration and joint development opportunities for taking this, and other patented AT technologies, into full production.