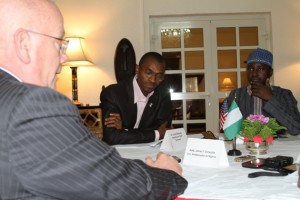 Exactly at 1.30 pm Mohammed Sani a Senior Information Specialist at the Embassy was on hand to welcome us. He led us into a foyer where we were warmly welcomed by the Information Officer Rhonda Augustus, with a welcome gift of a lapel pin which had the Nigerian and American flag.

The event was the first media round table for Ambassador James F. Entwistle who had resumed duty as the United States Ambassador in Nigeria in November 2013. The team included from Punch Newspaper Niyi Odebode, Sani Suleiman from Radio Nigeria and Chikwudi Ekezie from News Agency of Nigeria and Alkasim Abdulkadir a freelance journalist and blogger.

On terrorism and the deployment of drones

Ambassador Entwistle remarked the United States will not act unilaterally as regards internally security in Nigeria; he went further to say designating Boko Haram as terrorist organization was to show Nigeria that they endorsed their counter-terrorism efforts and most importantly it will help the US follow to the financial trail.

As part of the America’s support to Nigeria’s counter-insurgency strategies a conference on counter-terrorism is currently taking place in Abuja at the time of writing this.

This is by far the biggest concern of the average Nigerian on the street is that of obtaining a travel VISA to the United States. Amb. Entwistle said that there was a 45% increase in Visas issued to Nigerians travelling to the United States last year. Legitimate travelers were welcome to apply he added. He advised that those applying for Visas should do so well ahead of time and also follow the process and not go through third parties. He made a personal pledge and guaranteed that any Nigerian who applies for the US Visa, whether it is granted or not will be treated cordially.

The United States government has always been at the forefront of credible elections in Nigeria, this fact is not going to change under him.”We are discussing internally right now in the US Embassy our approach to the elections, what resources will be available and we look forward to sitting down with INEC and other partners to discuss how we can help the Nigerian people have a credible and transparent election that they deserve and they want.”

He said that the US regarded Nigeria as a strategic partner and stressed that the fact President Barrack Obama had yet to visit Nigeria did not mean that Nigeria’s rating in the US had dropped. The Ambassador said President Jonathan was among three world leaders that Obama met with last fall, this was simply a reflection of the respect the United States had for Nigeria.

On the fight against drugs in Nigeria and West Africa

The Ambassador said the DEA will continue its partnership with Nigeria’s NDLEA’s counternarcotics effort and the partnership was the kind of issue that could be dealt with internally.

According to him, it will be a platform for healthy discuss, an avenue for Nigerians to debate issues that concerns them.

There is a tendency for diplomacy to remain on the trade and politics pedestal. Ambassador Entwistle has promised to also expand relations between the United States and Nigeria

“For example, on the education and cultural front, we have a very interesting initiative, the Young African Initiative,” the envoy said, explaining that the initiative was aimed at developing the capacities of young Africans for national development.

He said he was also interested in the private sector, adding that it was wrong in diplomatic circles to assume that the work of diplomacy depended only on government-to-government relationships.

Activities since his arrival

Since his arrival he has presented his credentials to President Goodluck Jonathan at the Presidential Villa in Abuja and he has also been accredited as the United States’ Representative to the Commission of the Economic Community of West Africa States (ECOWAS). His credentials were received by ECOWAS Commission President Kadré Desiré Ouedraogo in a brief ceremony at the commission’s headquarters, Abuja

One of his first official act was the opening of the Mapa Primary Health Center in Bwari Area Council in Abuja. The November 29 event was his first official act commemorating this year’s World AIDS day. The Mapa primary health center is a collaborative effort between the Tabitha Cumi Foundation and the U.S. Ambassador’s Small Grants Program. Mapa community is one of the 23 recipients of grants under the 2013 PEPFAR Small Grants Program. The community received $10,000 to construct and furnish a primary health care clinic.

James F. Entwistle was sworn in as the Ambassador to the Federal Republic of Nigeria on October 28, 2013. A career member of the Senior Foreign Service at the rank of minister counselor, Ambassador Entwistle most recently served as the U.S. ambassador to the Democratic Republic of the Congo. Ambassador Entwistle is a graduate of Davidson College in North Carolina. His foreign languages are French and Thai. He is married to Pamela G. Schmoll and they have two children.

#NewswireEditorial: Seeing Through The Pact Between Olusegun Obasanjo & Buruji Kashamu